Staying the bail granted to 4 West Bengal leaders in the Narada case, the Calcutta HC came down heavily on the conduct of the TMC supremo Mamata Banerjee. 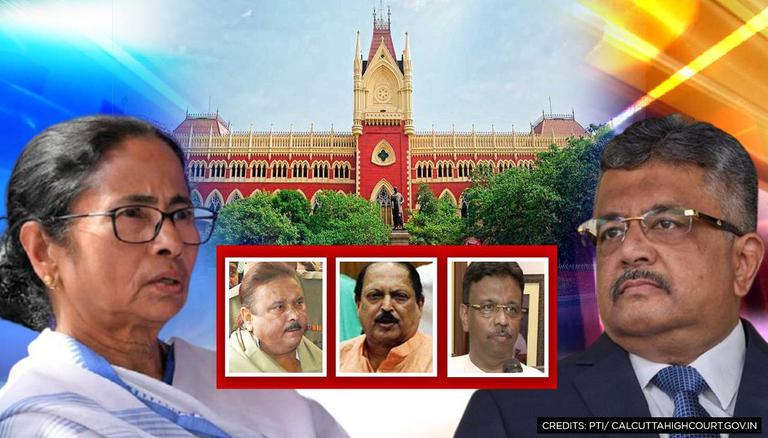 
Staying the bail granted to 4 West Bengal leaders in the Narada case, the Calcutta HC came down heavily on the conduct of the TMC supremo Mamata Banerjee. After an unprecedented late-night hearing on Monday, a bench comprising Chief Justice Rajesh Bindal and Justice Arijit Banerjee remanded Ministers Firhad Hakim and Subrata Mukherjee, TMC MLA Madan Mitra and ex-legislator Sovan Chatterjee to judicial custody till May 19. Referring to the 6-hour dharna staged by the WB CM outside the CBI office and the presence of Law Minister Moloy Ghatak in the trial court, Solicitor General Tushar Mehta argued that there was an attempt to put pressure.

Maintaining that this reflects a total failure of rule of law, he sought the transfer of the trial of the case as per the provisions of Section 407 of the CrPC. On the other hand, Advocate General Kishore Dutta asserted that the CBI officers were provided full protection by the local police for the discharge of their duty. Weighing in on the allegation that the life of CBI officials is in danger, he highlighted that no official complaint has been filed by the central agency. However, the Solicitor General urged the HC to take up the matter immediately as people will otherwise get a message that any order can be secured by "mobocracy".

Here are HC's key observations from the order:

"The facts which are not in dispute are that a case under the Prevention of Corruption Act was registered against many accused including some of the Ministers in the present Government in the State of West Bengal, on the directions issued by this Court. In view of various orders passed by the Supreme Court, the investigation and prosecution of cases against M.P.s and M.L.A.s were to be monitored by the Court. It was only thereafter that the matter was expedited."

The HC also made it clear that Governor Jagdeep Dhankhar was the competent authority to sanction the prosecution of the 4 erstwhile Ministers by invoking his powers under Articles 163 and 164 of the Constitution. This is in clear contrast to WB Speaker Biman Banerjee's claim that the arrests were illegal as the CBI did not seek his permission. The bench noted, "Sanction of prosecution was granted by the Competent Authority and four accused were arrested in the morning today".

"It is claimed by Mr. Tushar Mehta, learned Solicitor General of India that she (Mamata Banerjee) was demanding their unconditional release but the fact that she was present there and some supporters were also there, was not denied by learned Advocate General. In addition to that the stand of learned counsel for the C.B.I. is that the Law Minister of the State along with supporters mobbed the Court where the accused were to be presented along with charge sheet. The Law Minister remained in the Court complex throughout the day till the arguments were heard."

"Confidence of the people in the justice system will be eroded in case such types of incidents are allowed to happen in the matters where political leaders are arrested and are to be produced in the Court. Public trust and confidence in the judicial system is more important, it being the last resort. They may have a feeling that it is not rule of law which prevails but it is a mob which has an upper hand and especially in a case where it is led by the Chief Minister of the State in the office of CBI and by the Law Minister of the State in the Court Complex. If the parties to a litigation believe in Rule of Law such a system is not followed."

According to reports, Narada news portal chief Mathew Samuel had contacted the then deputy mayor of the Kolkata Municipal Corporation and IPS officer SMH Mirza through local contacts in 2016. Reports add that Mirza then facilitated in establishing Samuel's contact with several top-ranking Trinamool officials like - Madan Mitra, Mukul Roy, Saugata Roy, Kakoli Ghosh Dastidar, Prasun Bannerjee, Subrata Mukherjee and Iqbal Ahmed to name a few. Ahead of the 2016 West Bengal assembly polls, Samuel had posed as a businessman of Impex Consultancy Solutions floated by Samuel himself to conduct a sting operation.

Samuel while interacting with Mukul Roy, aides of Trinamool's Abhishek Banerjee had reportedly caught them on camera accepting bribes for illicit favours. Mirza was seen accepting Rs 5 lakh in cash from a businessman in one of the footages and has claimed that he was receiving the cash on Roy's instructions. CBI has arrested senior IPS officer SMH Mirza and questioned erstwhile TMC minister Mukul Roy too in connection to the case. It is pertinent to note that no coercive action has been taken against Roy, a BJP leader, until now.