Weeks ahead of Lok Sabha polls in the country, Republic TV, association with CVoter has come up with the National Approval Ratings which brings the mood of the nation if the elections take place in December.

Months ahead of the all-important Lok Sabha polls, Republic TV, in association with CVoter, has released the National Approval Ratings which captures the mood of the nation if the elections were to take place in December. In 2014, the BJP registered a massive seat-share in Uttar Pradesh, winning 73 out of 80 seats in Uttar Pradesh which is the country's most electorally significant state. The Congress, on the other hand, managed to secure just 2 seats -- Sonia Gandhi's Rae Bareli and Rahul Gandhi's Amethi -- while the SP (Samajwadi Party) who were in power in the state at that time, won only five and Mayawati's BSP failed to win a single seat. In December 2018, however, the situation is projected to have changed.

Here are the National Approval Ratings for Uttar Pradesh if the elections were held in December 2018: 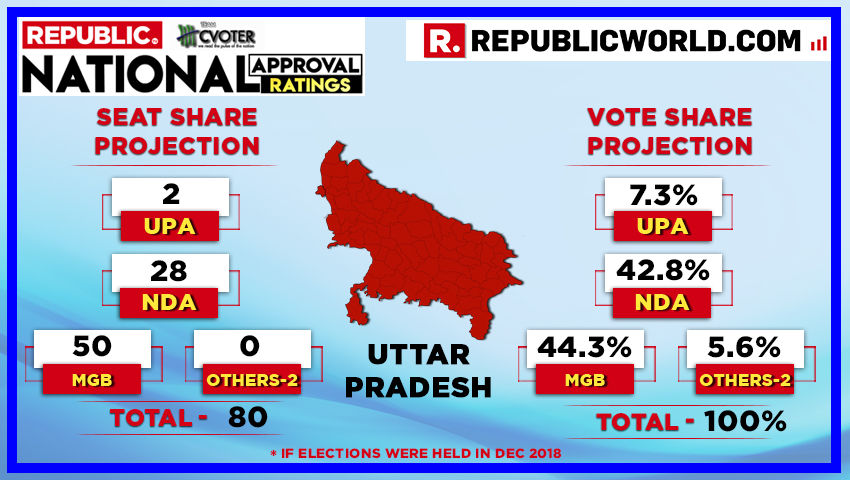 These projections have come days after the BJP lost three of the Hindi heartland states of the country to the Congress in the assembly elections 2018, the result of which came on December 11.

As per the December projections, BJP-led NDA's figures in alliance with Apna Dal are predicted to fall massively down from 73 to just 28 seats. However, the gathbandhan of SP and BSP in the state is predicted to make big gains by winning 50 seats, 8 seats more than the November projection of the National Approval Ratings.

Therefore, going by the projections, the Hindi heartland UP is going against the BJP at the assembly level with the 'gathbandhan' of Akhilesh Yadav's SP and Mayawati's BSP swooping the majority.

Comparison of the current numbers with the projections of October and November National Approval Ratings:

November's National Approval Ratings projection came as big worry for PM Modi, Amit Shah and UP CM Yogi Adityanath, when the ruling coalition dropped from 73 seats in 2014 to just 31 Lok Sabha seats. The Rahul Gandhi-led UPA, which won just 2 seats in 2014, saw an increase to 5 seats, while the traditional Uttar Pradesh regional powers (and former rivals), Samajwadi Party and Bahujan Samaj Party, were projected to be the biggest gainers, increasing their combined seat share from just 5 in 2014 (of which BSP won none) to 44.

The alternative scenario (What is there is no Gathbandhan?)