With the Lok Sabha elections 2019 inching closer, Republic TV and CVoter are back with the National Approval Ratings to give a complete national picture as to who will win if polls are held today.

With the 2019 Lok Sabha elections looming ever larger, the political scenario in the country is currently in a state of flux, with parties desperately figuring out seat-sharing terms, snubbing or accepting each other with respect to alliances, or fielding their big names in various states. Republic TV and CVoter are back with the National Approval Ratings to give a complete national picture as to who will win if polls are held today.

Here are the National Approval Ratings for Uttar Pradesh if the elections were held in January 2019: 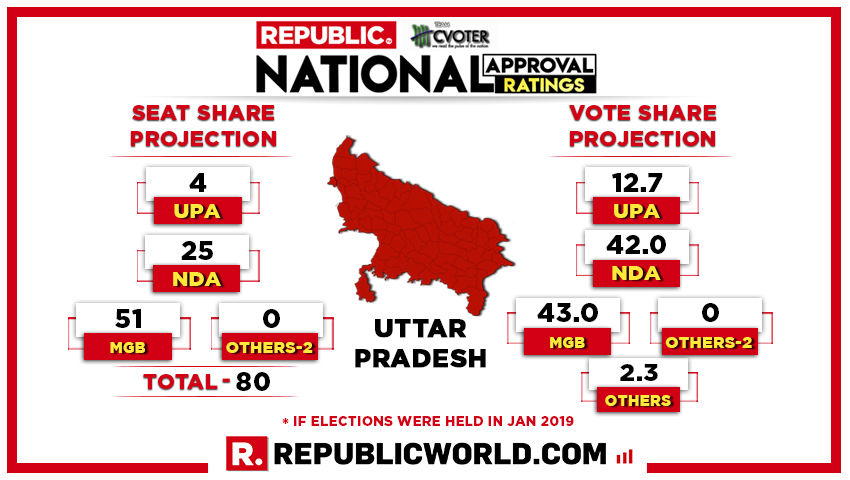 As per the BJP projections, BJP-led NDA's figures in alliance with Apna Dal are predicted to fall massively down to just 25 seats. However, the Gathbandhan of SP and BSP in the state is predicted to make big gains by winning 51 seats, 1 seat more than the December projection of the National Approval Ratings.

November's National Approval Ratings projection came as a big worry for PM Modi, Amit Shah and UP CM Yogi Adityanath when the ruling coalition dropped from 73 seats in 2014 to just 31 Lok Sabha seats. The Rahul Gandhi-led UPA, which won just 2 seats in 2014, saw an increase to 5 seats, while the traditional Uttar Pradesh regional powers (and former rivals), Samajwadi Party and Bahujan Samaj Party, were projected to be the biggest gainers, increasing their combined seat share from just 5 in 2014 (of which BSP won none) to 44.

The election year 2019 started off with India’s opposition appearing largely unwilling to acquiesce to Rahul Gandhi's proposal of the Congress serving as a platform for regional parties to come together in order to defeat the BJP. Despite the Congress successes in Rajasthan, Madhya Pradesh and Chhattisgarh, in Uttar Pradesh, the much-heralded Mahagathbandhan turned out to just be a 'Gathbandhan' as old enemies Akhilesh Yadav and Mayawati left the Congress out, forming an SP-BSP alliance. Left on its own, the Congress resolved to contest every one of the state's 80 seats and proceeded to formally induct Priyanka Gandhi Vadra into the party, appointing her and Jyotiraditya Scindia as General Secretaries for Uttar Pradesh. Elsewhere, former Gujarat CM Shankarsinh Vaghela is to join the NCP, while the Congress alliance with the TDP in Andhra Pradesh is also in doubt. Meanwhile, the BJP and Shiv Sena may have witnessed a thaw in their relationship with the Maharashtra government sanctioning Rs 100 crore for a Balasaheb Thackeray memorial.

On issues concerning large numbers of people, the government passed a constitutional amendment giving a green signal to provide 10 percent reservation in jobs and educational institutions to economically weaker sections in the general category, while numerous agrarian schemes that needn't necessarily be farm-loan waivers have also been spoken of in the lead-up to the Modi government's final budget.