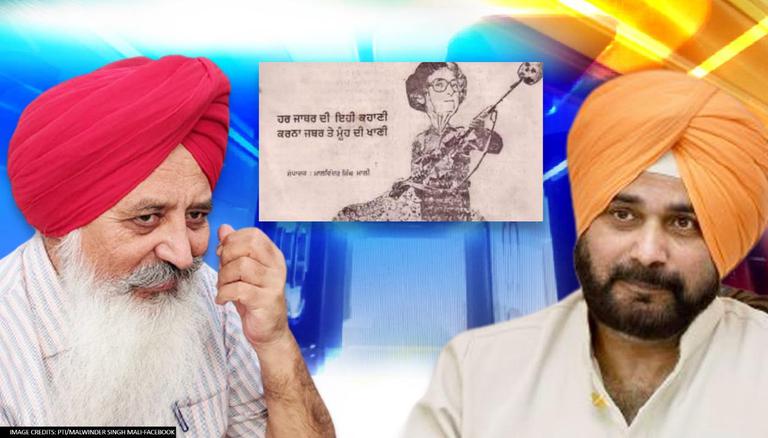 
Trouble continues to brew in Congress as Punjab Congress chief Navjot Singh Sidhu's advisor Malvinder Singh Mali shared a controversial sketch of late Prime Minister Indira Gandhi carrying a gun with a skull hanging from its end, standing on a pile of human skulls - depicting the 1984 anti-Sikh riots. The sketch which originally featured in Punjabi magazine 'Jantak Paigam' in June 1989, had a tagline 'Every repression is defeated'. Mali also made bizarre comments terming India and Pakistan 'illegal occupants'. Currently, Sidhu has hauled both Malvinder Singh Mali and Pyare Lal Garg for their controversial comments. 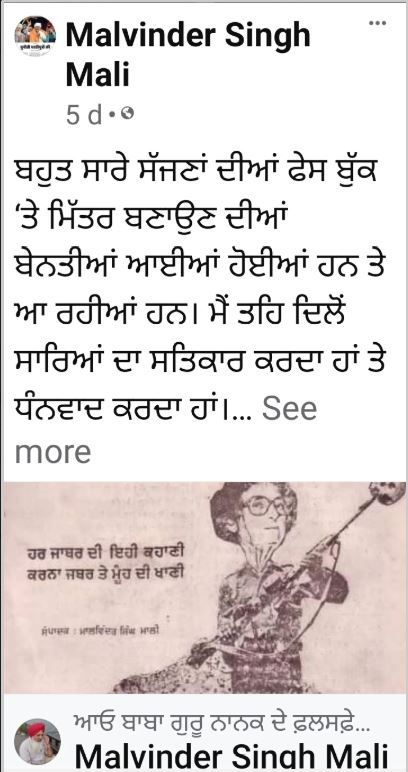 Earlier on Sunday, Mali wrote on Twitter, "Kashmir is a separate country, and India and Pakistan are illegal occupants". Irked by his comments, Punjab CM Amarinder Singh underlined that they could prove 'potentially dangerous' to the peace and stability of the state and the country. Warning them against making such 'atrocious' comments in the future, the Punjab CM Capt Amarinder Singh suggested that they rather stick to advising Sidhu.

Slamming Mali, Amarinder Singh stated, “Kashmir was and is an inalienable part of India. This is totally anti-national.” The CM also slammed Mali for failing to withdraw his statement despite the widespread condemnation it had evoked from other parties and also from within Congress. Meanwhile, Sidhu's other advisor Pyare Lal Garg had slammed the CM for his criticism of Pakistan was 'not in the interest of Punjab'. The CM said Sidhu’s advisor was clearly disconnected from the ground reality.

“The fact, which every Punjabi and in fact every Indian knows, is that Pakistan’s threat to us is real. Garg may have forgotten the thousands of Punjabi lives lost in the fire of Pak-backed terrorism of the 1980s and 1990s, but I have not. we will continue to do everything in our power to fight off Pakistan’s dangerous games,” said Singh.

As per sources, Garg and Mali are at Navjot Sidhu’s residence in Patiala for their controversial attacks against the CM and over J&K and Pakistan. Advising the Sidhu to steer clear of Mali's controversial Indira Gandhi sketch, Congress veteran Sandeep Dikshit said, "It's objectionable. I advise Sidhu ji to keep distance from him politically, he must ask him to be in his limits & stop making comments on things he has no knowledge of".

Recently, Punjab CM Amarinder Singh relented to rebel MLA Najot Singh Sidhu's demands after the Congress High Command appointed Sidhu as the President of the Punjab Pradesh Congress Committee replacing  Sunil Jakhar. In a bid to balance the power equation between the CM and Sidhu, Congress appointed four Working presidents to the state unit - Sangat Singh Gilzian, Sukhwinder Singh Danny, Pawan Goel, and Kuljit Singh Nagra. While Amarinder Singh affirmed that he will abide by High Command's decision, he was reportedly not informed of Sidhu's appointment. The miffed CM had demanded a public apology, refusing to meet Sidhu till then. Sidhu later, once again riled up the CM, demanding him to fulfill the 18 points promised by the Congress ahead of polls in February 2022.