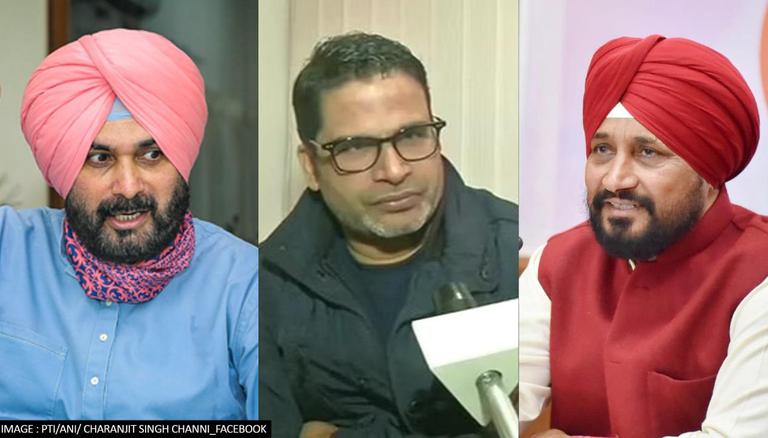 
Punjab Congress President Navjot Singh Sidhu on Friday reacted to poll strategist Prashant Kishor's possible induction into the party, which has been put in doubt due to internal fissures and Captain Amarinder Singh's breakaway, ahead of the crucial 2022 elections.

According to sources, Congress is mulling to rope in Prashant Kishor once again, to handle its Punjab Assembly poll campaign. The IPAC founder has been credited with helping Congress & Captain Amarinder win 77 out of 117 seats in the 2017 Punjab elections.

Reacting to Kishore's possible entry into the party, Sidhu said the Congress high command will decide on his induction.

Earlier on Wednesday, in a meeting with the MLAs, Punjab Chief Minister Charanjit Singh Channi revealed that he was advised by AICC Punjab in-charge Harish Chaudhary to give the responsibility of shaping the poll strategy to Prashant Kishor. The move assumes significance as former CM Captain Amarinder's newly formed Punjab Lok Congress is likely to affect the prospects of the Sonia Gandhi-led party.

In a move that can potentially rock Punjab's political circles, Captain Amarinder Singh stepped down as Chief Minister of Punjab in September and weeks later, announced that he is floating a new party. Captain Amarinder said his 'Punjab Lok Congress' is keen to form an alliance with the Opposition BJP and other breakaway Akali groups in the upcoming assembly elections.

The development comes as a major setback to the Congress, which came to power in 2017 piggybacking on the relentless campaigning of Captain Amarinder Singh. The grand old party is now in damage control mode, attempting to rope in Prashant Kishore with his innovative campaigns.

Notably, in March this year, the then Punjab CM Amarinder Singh had announced that Prashant Kishor has joined Congress as his principal advisor. It was stated that his term of appointment would be co-terminus with Singh's tenure and he would be paid an honorarium of Rs.1. The poll strategist was also provided one private secretary, one personal assistant, one data entry operator, one clerk, two peons, a free fully furnished government residence, and a camp office as admissible to a Cabinet Minister. Moreover, he was entitled to conveyance allowance, Executive Class travel in Train/Air, and hospitality expenditure of Rs. 5,000 per month.

READ | Navjot Sidhu tells Congress it won't get to decide who will be Punjab CM; dares Channi

Akin to a Cabinet Minister, he was not only entitled to medical facilities but also the reimbursement of medical expenses. However, he resigned from this post on August 5 itself, citing that he wanted to take a "temporary break" from an active role in public life. This came in the wake of his decision to quit the political strategy space after the West Bengal Assembly polls.