Navjot Singh Sidhu posted an emotional video celebrating his elevation with Congress ministers with 'one family' caption, however did not mention Captain again. 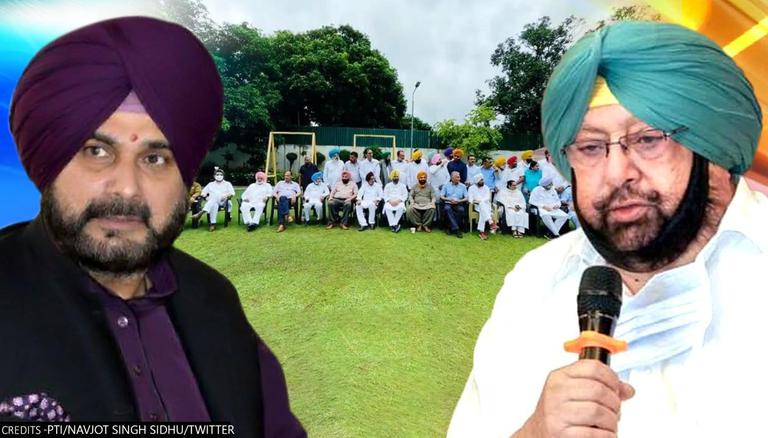 
The infighting in Congress has now taken another turn with Navjot Singh Sidhu's promotion and no mention of Chief Minister Amarinder Singh anywhere. After the official announcement broke regarding the elevation of the Congress leader, the former cricketer talked about 'Congress family' in multiple statements however did not mention Punjab CM and party leader Captain Amarinder Singh. On July 20 (Tuesday) Sidhu posted an emotional video where multiple clips of Sidhu hugging, celebrating his success were gathered with the caption 'In line of Duty | Punjab Congress Family | 19 July 2021'.

In the first response posted by the newly elected Punjab Pradesh Congress Committee (PCC) President, he had written that he will work with 'every member of Congress family'.

In his response former swashbuckling cricketer, Navjot Singh Sidhu posted a picture of his father with Jawaharlal Nehru on Twitter. Accepting his 'privilege' he wrote that his father was a 'Congress worker who left a royal household, joined the freedom struggle and was sentenced to death'. In a series of tweets, the newly elected party Chief of Punjab expressed gratitude towards his elevation.

To share prosperity, privilege & freedom not just among a few but among all, My father a Congress worker left a royal household & joined freedom struggle, was sentenced to death for his patriotic work reprieved by King’s Amnesty became DCC President, MLA, MLC & Advocate General. pic.twitter.com/fTv0eNlNyt

Highlighting the 'patriotic work' of his father, the Congress leader thanked Congress leader Rahul Gandhi and Priyanka Gandhi for 'bestowing their faith' in him. He also marked his thankful message with the hashtag 'Jittega Punjab' (Punjab will win) mission and asserted, 'will work along with every member of Congress family in Punjab'. After series of meetings between Sidhu and party high-command, the decision was announced keeping upcoming elections in mind.

After Navjot Singh's promotion, answers were demanded from several party ministers regarding Sidhu and Captain's dispute to which they replied that it is just a 'difference in opinion' while party leader Sukhjinder Singh Randhawa showered confidence and asserted, 'Sidhu Saab will go and get blessings of Captain '. The decision regarding Sidhu's elevation had to be taken as elections are inching close and the dispute between Chief Minister Captain Amarinder Singh and rebel leader Navjot Singh Sidhu had reached a high level.