Afghanistan crisis | Omar Abdullah Slams Biden Over US' Hasty Departure From Kabul: 'This Is On You, Not Trump'

Ex-J&K CM Omar Abdullah on Monday, blamed US President Joe Biden for the disastrous US troop withdrawal amid chaotic scenes from Kabul airport of Afghans 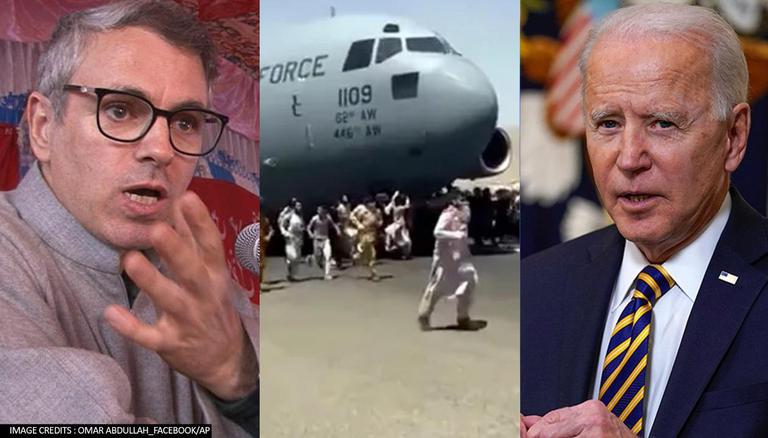 
Aghast at the chaotic visuals of Afghans clinging to the US aircraft departing from Kabul, ex-J&K CM Omar Abdullah on Monday, blamed US President Joe Biden for the disastrous US troop withdrawal. Admitting that US cannot be grudged for their departure, he lashed out at Biden saying 'This on you, can't blame Trump'. Stating that as POTUS Biden set the final date, creating a vacuum, Abdullah said that this hasty departure was Biden's foreign policy legacy.

Omar Abdullah lashes out at Biden

I don’t grudge the US their departure from Afghanistan but this wasn’t the way to leave. @JoeBiden this is on you. You can’t blame Trump or anyone else for this. As @POTUS you set the final date & created a vacuum. This is your foreign policy legacy, make no mistake. https://t.co/t6HrMHzNzw

Addressing the world on US' hasty withdrawal from Afghanistan, Biden on Monday, said that while the decision to withdraw was hard, it was the right one for America. Stating that the US could not anticipate the rapid fall of the government, he said there is 'never a good time to withdraw US forces from Afghanistan. Blaming the Afghan troops, he stated that the US spent trillions of dollars in equipping them but they did not fight for their country.

READ | KL Rahul's stern warning to England post Lord's win; 'You go after one of our guys...'

'I am President of the US and the buck stops with me. I am saddened by the facts the world now faces, but that the decision was the correct one for America. Our mission in Afghanistan was never supposed to have been nation-building. Our only interest was preventing any attacks on our homeland," said Biden.

Blaming Afghanistan, he added, "Afghanistan's President fled the country. There is no chance that we send the US for one year or five years or 12 more years. Americans cannot and should not deserve to die." While admitting that the images of Afghanistan now are 'gut-wrenching' Biden said, "I am clear of my answer. I am not going to conflict with the interests of the US."

Panic and chaos reigned at Kabul airport as thousands of people attempted to flee from Afghanistan at the earliest on Monday. As per visuals, many civilians were injured on the tarmac as they rushed to get on the plane. At least seven people were killed at Hamid Karzai International airport in Kabul after US troops opened fire, reports local news agency Tolo News. Three people also fell to their death while hanging onto a departing US plane's wheels. Many countries like UK, Germany, Canada and India are preparing for safe evacuation of its nationals from the war-torn nation.

While Taliban has taken over Kabul, 6000-strong US military is currently taken control of the airport's perimeter overseeing evacuation. Ex-Afghanistan President Ashraf Ghani has already fled to Tajikistan along with several ministers while ex-Presidents Abdullah Abdullah and Hamid Karzai are left to handle a 'smooth transition'.  According to reports, the Afghan airspace has been shut amid firing, with all commercial and military flights being suspended. The Taliban took over Kabul on Sunday after major cities like Kandahar, Herat,  Mazar-e-Sharif, Jalalabad and Lashkar Gah fell without resistance as US troops retreat after 20 years from war-torn Afghanistan.