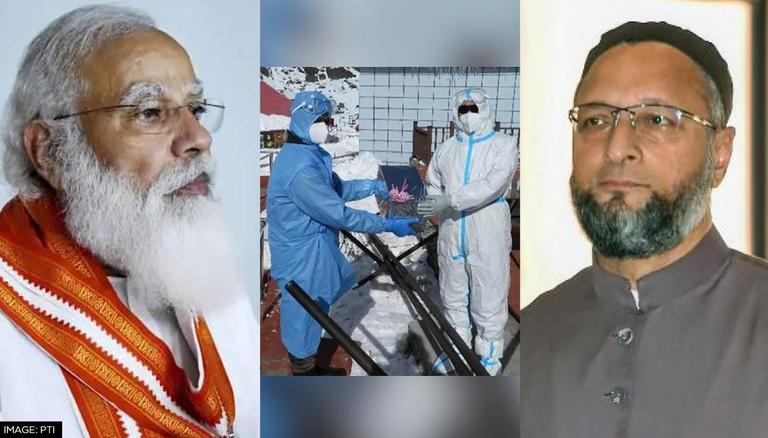 
Miffed at the Indian Army for exchanging sweets with its Chinese counterparts at Line of Actual Control (LAC) on New year's day, AIMIM chief Asaduddin Owaisi on Sunday questioned the message PM Modi was sending Chinese President Xi Jinping. In a series of tweets, the Hyderabad MP claimed that the Centre had totally capitulated to China in Ladakh by exchanging sweets at the regions of border skirmishes. Incidentally, Indian Army also exchanged sweets with the Pakistan counterparts along the Line of Control (LoC) on Saturday.

Branding this govt the weakest ever, Owaisi tweeted," Officially acknowledging that the Chinese are sitting well inside our territory at Depsang, Demchok and in Hot Springs is the new normal of Modi’s New India but what are his 56-inch plans to throw the Chinese out from Indian soil? This government is incapable of defending Indian territory against Chinese aggression and is capitulating to Beijing’s bullying. Has India ever seen a weaker PM and a more scared government than this one?".

He added, "Modi’s own minister is being bullied by a lowly Chinese official in the embassy in Delhi. As have been other elected MPs for attending a Tibet event in India. Have we heard a word from the government on such brazen interference and bullying? Why has the Chinese ambassador not been summoned so far?".

On January 1, Indian and Chinese troops exchanged sweets and greetings at several border posts along the Line of Actual Control (LAC) to mark New Year 2022. The border posts include - Nathula, Kongra La, KK Pass, Bottleneck,  Chushul Moldo, Demchok Hotspring, Konkala, DBO, Bum La, and Wacha Damai. In response, Chinese mouthpiece Global Times termed it as a 'positive sign' since the 13th round of corps commander-level talks in Oct ended in a stalemate.

The gesture if verified is seen as a positive sign since the 13th round of corps commander-level talks in Oct ended in a stalemate with unreasonable demand from Indian side. https://t.co/pAfCnxzbto

Over the last round of talks, the Chinese People's Liberation Army has retreated from the Finger 4 area and Patrol point 14 along the LAC, while India pre-empted PLA activity on the Southern Bank of Pangong Tso Lake capturing positions of 'strategic importance' in the Fingers area. While disengagement has completed north and south of Pangong Tso, it is yet to be completed in friction points such as Hot Springs, Gogra and Depsang. 20 jawans were martyred on June 5-6, 2020 amid a violent face-off between Indo-China troops at LAC's Galwan Valley.