The second day of the Parliament's Monsoon Session was also marked by disruptions owing to heavy sloganeering and protests by Opposition MPs who demanded discussions on GST hike, inflation, and the Agnipath scheme. Both Houses were adjourned for the day, with the Opposition claiming that the Centre was unwilling to hold a debate on price rise. 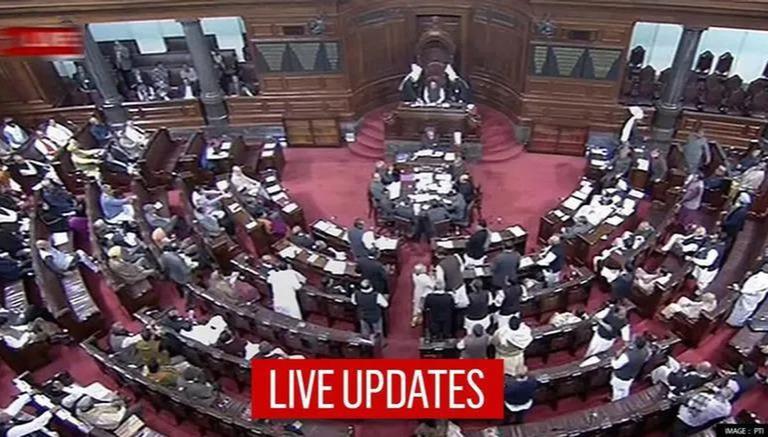 The government is not contemplating any legislative measures for population control, Minister of State for Health Bharati Pravin Pawar told the Rajya Sabha on Tuesday.
(PTI)

"All General Secretaries were called by the organising secretary for a meeting & future plans of the party are with them. They can give you details about it. All I can say is that tomorrow again we'll raise the issue of price rise in Parliament," said Congress leader Mallikarjun Kharge

Nearly 742 km of metro rail lines are operational in 19 cities across the country, according to a parliamentary panel report tabled in Lok Sabha on Tuesday.

Also, about 1,037 km lines, including 82 km Delhi-Meerut Regional Rapid Transit System (RRTS) corridor, is under construction in 27 cities, as per the 13th report (17th Lok Sabha) of the Standing Committee on Housing and Urban Affairs (2021-22) on the subject, 'Implementation of Metro Rail Projects - An Appraisal'.

The first metro rail stretch was commissioned in Kolkata in 1984 between Esplanade and Bhowanipur, covering a distance of 3.40 km with five stations under Metro Railway, Kolkata.

At Present, 27 cities have either operational or under construction network, the report said.

Many more cities like Varanasi, Thiruvananthapuram, Kozhikode, Guwahati, and Chandigarh are aspiring to have metro rail system, the panel report said.

Despite a lapse of more than four years, six of the 12 states where metro rail networks are either operational or under construction were yet to constitute Unified Metropolitan Transport Authority (UMTA) as a statutory body, according to the report.

These six states are Delhi, Karnataka, Gujarat, Madhya Pradesh, Maharashtra (in Mumbai only) and Rajasthan, it said.

For Delhi Metro, the report said that "the process of setting up of UMTA has been initiated in September, 2021. The proposal is under consideration of GNCTD (Delhi government) for taking necessary action".

"Opposition is not concerned about the issues facing the farmers or the common man. They're just interested in playing politics, in a bid to stall the progress & welfare of the public. PM Modi & BJP committed to ensuring benefits to the farmers," said Union Agriculture minister Narendra Singh Tomar after Parliament proceedings.

Hours after being adjourned due to Opposition ruckus, both Houses of the Parliament have resumed proceedings. 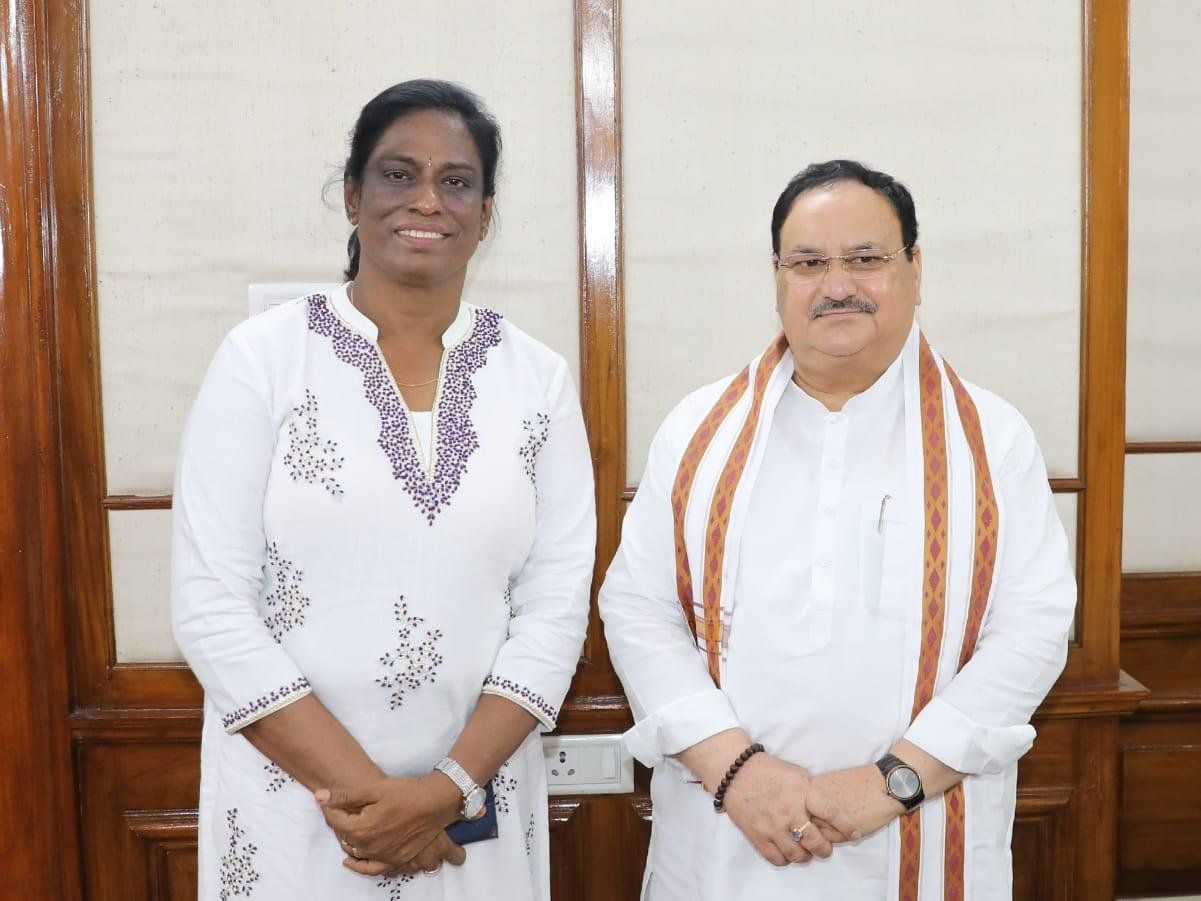 #WATCH | "It's just a rumour. Earlier system, existing since pre-independence era, is going on. No change has been made. Old system is being continued," says Defence Min Rajnath Singh on Opposition's allegations that caste & religion certificates being asked for Agnipath scheme. pic.twitter.com/gtBJAtaSvP

"However, inclination towards radical ideologies is minuscule as compared to the population of the country owing to various factors," he added.

MoS Home Nityanand Rai on Tuesday revealed the number of major terrorist incidents, number of security force personnel martyred and injured & number of civilians who lost their lives and who were injured in incidents in the hinterland and in Jammu and Kashmir during the last two years 2020 and 2021. Due to concerted and coordinated efforts of all the stakeholders, terrorism-related violence has been contained to a large extent in the country: MoS Home Nityanand Rai to Lok Sabha

Delhi | TRS MPs held a protest in front of Mahatma Gandhi's statue in Parliament on the issues of price rise and inflation. 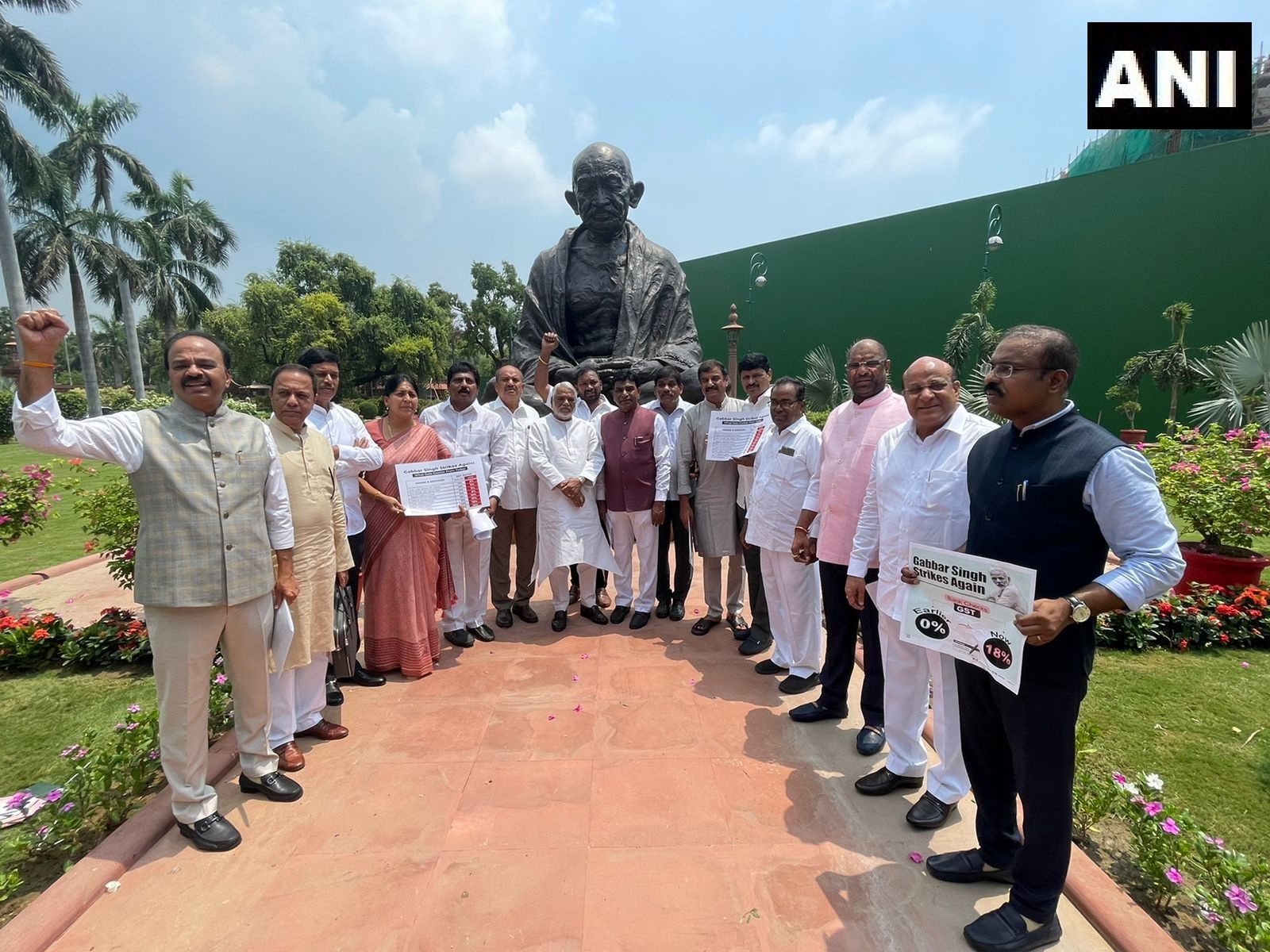 Union Minister Pashupati Nath slammed the Opposition for creating a ruckus in the Parliament and said such disruptions send a wrong message to the nation.

"The Opposition is only capable of creating ruckus and drama in the Parliament. They should not disrupt the proceedings. Parliament is the temple of the Constitution and the citizens look up to their representatives. Such behaviour sends a wrong message to the country,"  Pashupati Nath told Republic.

On the issue of GST and inflation, the Union Minister said, the government is aware of the situation and is taking necessary steps. 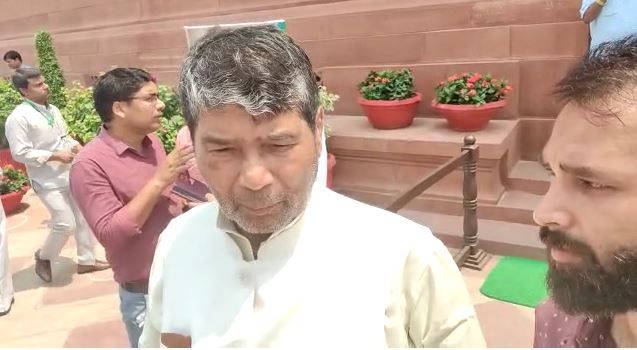 "The government formed a committee on farm laws that consists of all BJP supporters. There is no representation of Punjab. All those who support the three black laws are part of the committee. It should be dismissed. A new balanced committee should be formed," demanded AAP MP Raghav Chadha.

Today the Opposition got the Rajya Sabha adjourned till 2pm on the issue of intolerable price rise and increase in GST, especially on food items, on which the Modi Sarkar is unwilling to have a debate.

Delhi | Aam Aadmi Party MPs protest against the Centre in front of Gandhi statue in Parliament against the delay in nod for Singapore visit to Arvind Kejriwal. 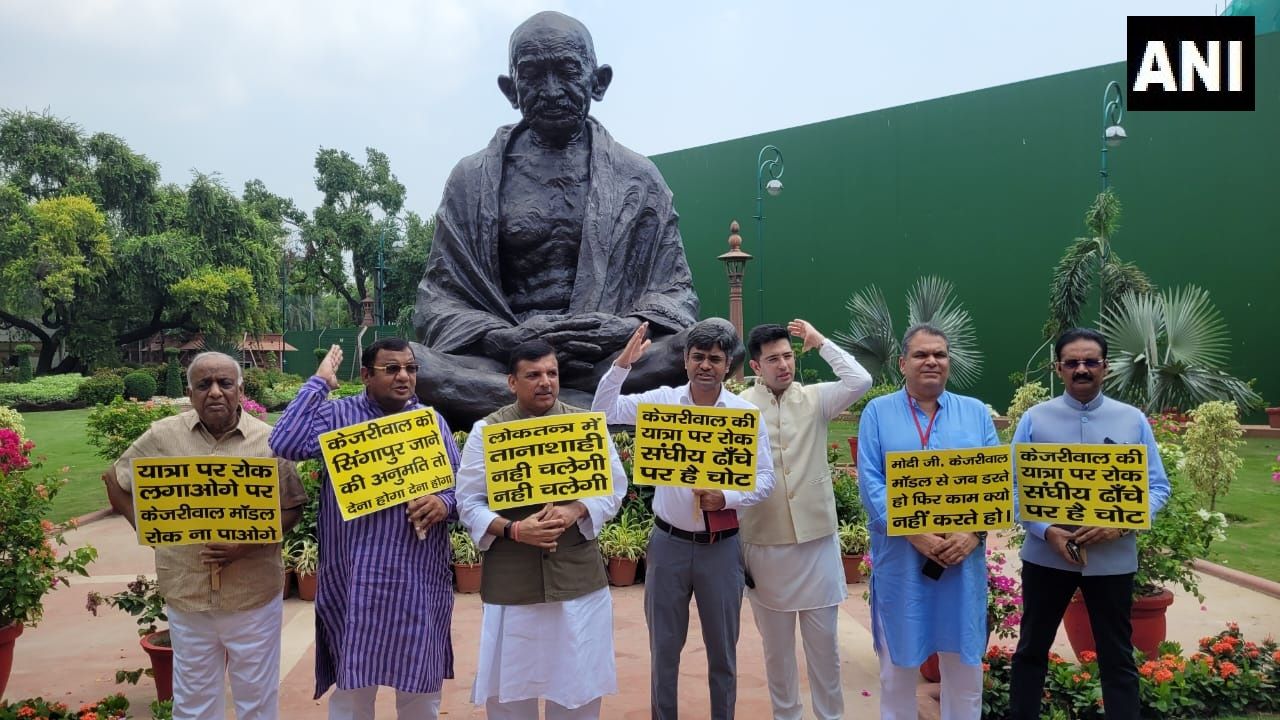 Lok Sabha Speaker Om Birla objected to raising placards inside the House as the Questions and Answer round went underway. Quoting the rulebook, Birla requested the agitating MPs to protest outside the Parliament. The Lower House has been adjourned till 2 PM.

Opposition MPs raised slogans against price hikes and inflation in Lok Sabha as house proceedings begin on the second day of Parliament. Heavy slogans were raised during the Question and Answer round.

Opposition MPs raise slogans against price hike and inflation in Lok Sabha as house proceedings begin on the second day of Parliament pic.twitter.com/c3HTjMRsGj

Minutes after the Parliament's Monsoon began, the Rajya Sabha proceedings were disrupted by Opposition protests, forcing Chairman Venkaiah Naidu to adjourn the House till 2 PM. The opposition parties are insisting on the discussion on price rise, GST hike and other issues.

PM Modi is discussing government strategy in Parliament with his top ministers, for the ongoing Monsoon session.

Congress MP Deepender Singh Hooda has given the suspension of business notice in Rajya Sabha over the Centre's Agnipath recruitment scheme for entry into the Armed Forces.

Delhi | Congress leader Rahul Gandhi joins Opposition protest over the issues of inflation and price rise, at Parliament, on the second day of the Monsoon session. 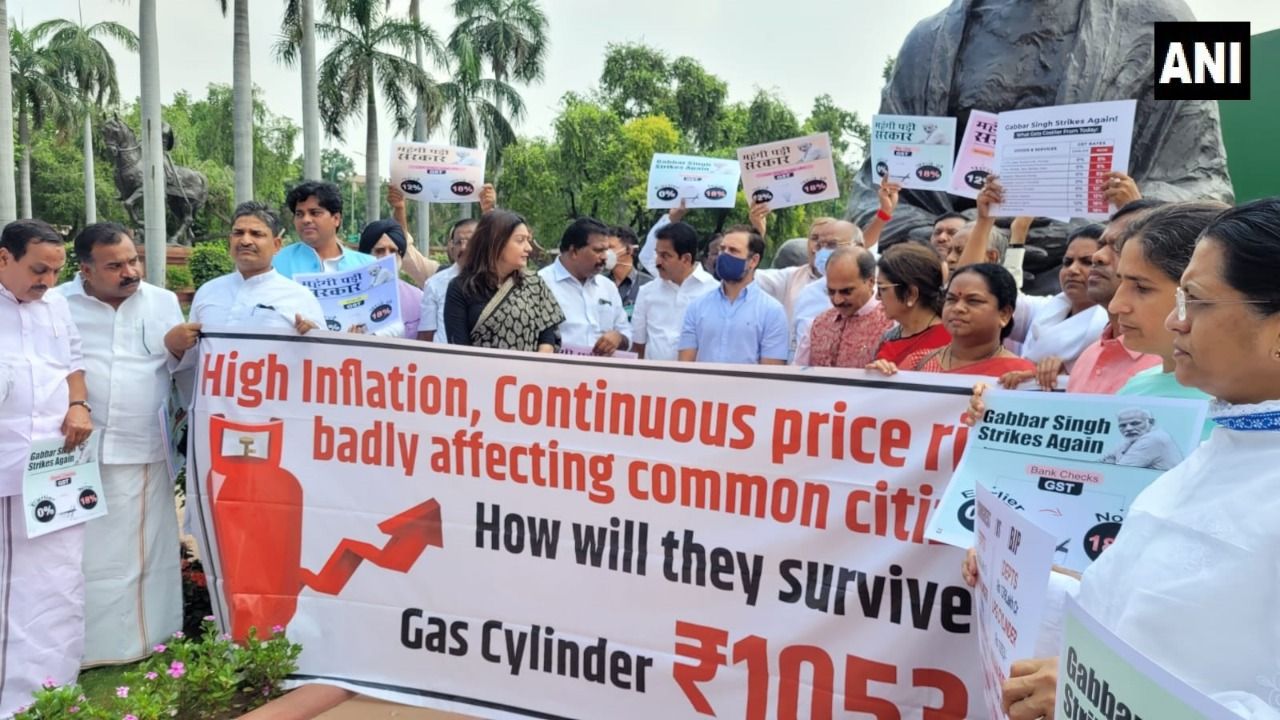 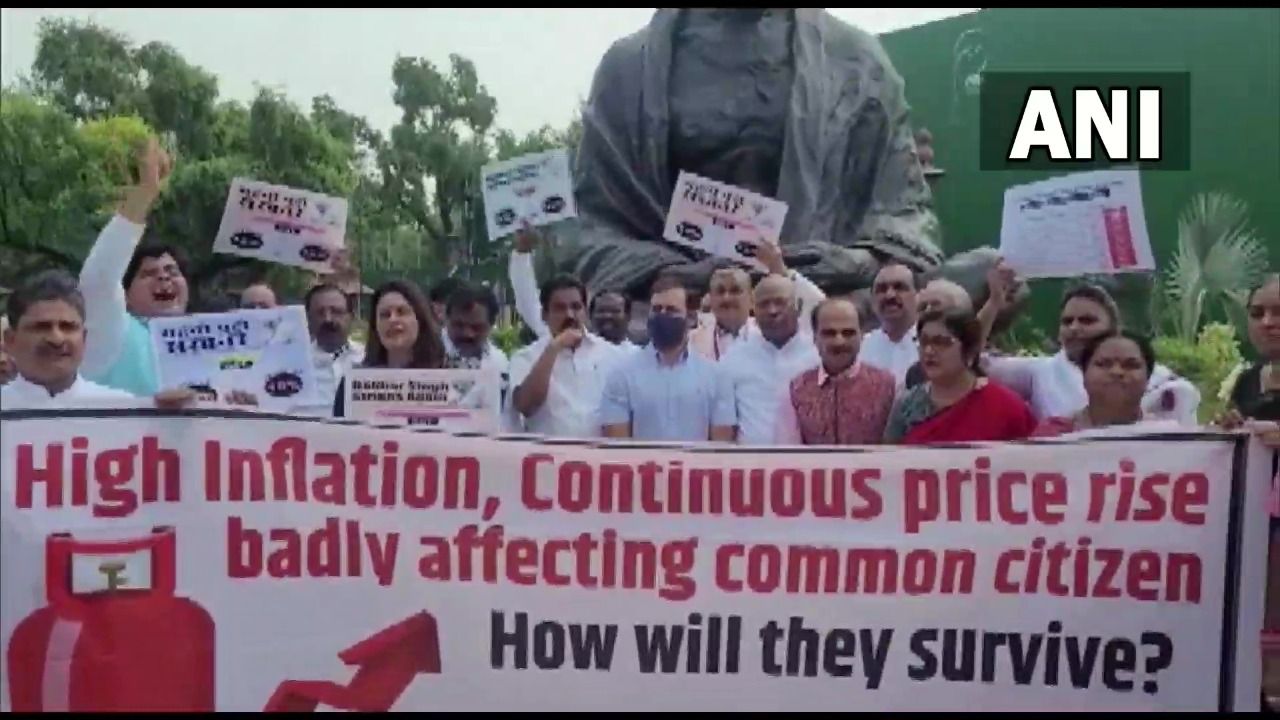 Monsoon session of Parliament | RSP MP NK Premachandran has given adjournment motion notice in Lok Sabha on "the incident of forcing girl students to remove innerwear before entering the examination hall during NEET examination in Kollam yesterday."

CPI(M) Rajya Sabha MP Elamaram Kareem has given a suspension of business notice under rule 267 on the issue of price rise and imposition of 5% GST on essential items.

Monsoon session of Parliament | DMK Rajya Sabha MP Tiruchi Siva has given a suspension of business notice under rule 267 on the issue of "hike in the price of petroleum products leading to increase in the price of essential commodities.

Monsoon session of Parliament | RJD MP Manoj Jha has given suspension of business notice in Rajya Sabha to discuss implications of Agnipath scheme and denial of opportunities to RRB aspirants. 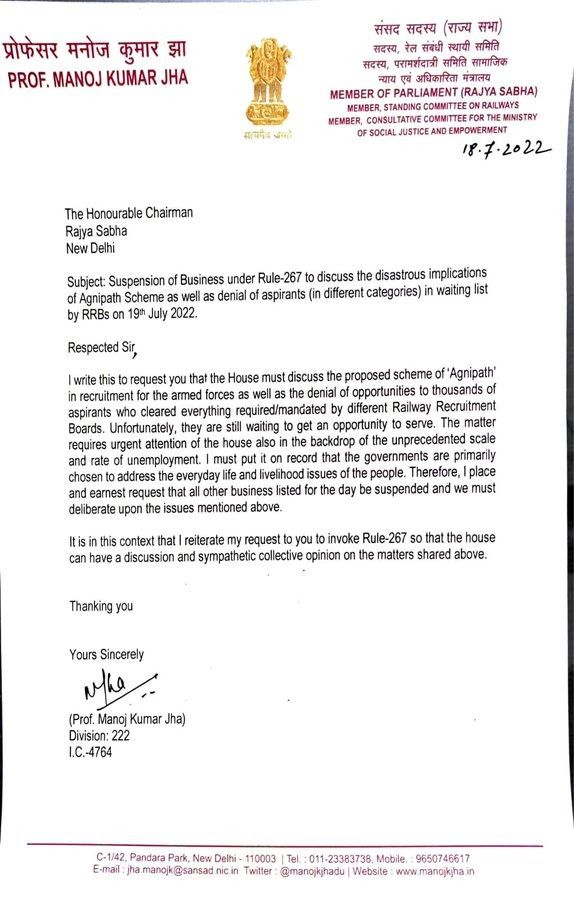 Congress MP Jairam Ramesh hit out at the Central government on Tuesday over the Public Sector Banks' Privatisation Bill and said selling off PSUs to a chosen few will be 'disastrous' for the country. He stated that Congress will oppose the bill in the ongoing Monsoon Session.

Today, 53 years ago, banks were nationalised. It was a transformational change. Now, Modi Sarkar is on a privatisation spree. Public sector banks must be equipped to face competition, but selling them off to a chosen few will be disastrous! Congress will oppose the Bank Sale Bill

Hitting back at the Congress leader, Union Minister Rajeev Chandrasekhar said the party was only opposing the Bill, due to its "long dubious record of crony lending and using PSUs as piggybanks for crony friends" during the UPA regime.