Parliament: No Bill To Be Tabled In Rajya Sabha On February 11

No bill will be tabled in the Parliament on Tuesday as scheduled, stated sources, amid BJP's three line whip to MPs asking them to be present in the House

No bill will be tabled in the Parliament on Tuesday, February 11 as scheduled, stated sources. This development comes at a time when the counting of votes is underway for the Delhi Assembly elections.

Earlier on Monday, the BJP had issued a three-line whip to all its Rajya Sabha members, asking them to be present in the House on Tuesday to "support the stand of the government". BJP's letter stated that "All BJP MPs of Rajya Sabha are informed that some very important Legislative work will be brought to the House on Tuesday, 11th February 2020, to be discussed and to be passed."

Meanwhile, Finance Minister Nirmala Sitharaman will reply in the House on Budget 2020 at 4 pm on Tuesday.

List of Bills that were expected to be tabled: 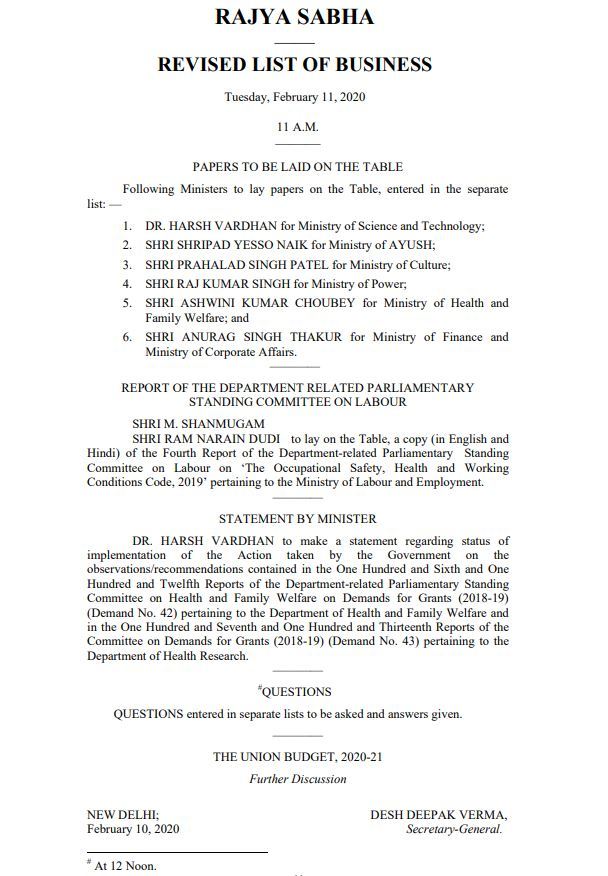 About the Union Budget Speech

On February 1, Finance Minister Nirmala Sitharaman had commenced the budget speech by stressing that the 2020 Budget is to boost the income and enhance purchasing power. She had further noted that the fundamentals of the economy were strong, inflation had been contained, banks had been cleaned up and formalization of the economy had taken place during the NDA government’s first term in office.

Read: Anti-CAA protesters scuffle with cops as march from Jamia to Parliament stopped

Along with it, she spoke about the positive impact after the introduction of GST and also paid homage to the late Arun Jaitley for his invaluable contribution. She had also listed the success of government schemes such as PMAY, Ayushmann Bharat, financial inclusion, and other schemes.

Read: "Acceptable?" asks Guv Dhankar as Mamata FM's budget speech gets live telecast but not his