Anurag Thakur said, "Some people get so dirty in the vote bank politics that they don't think twice before making statements against a Presidential candidate." 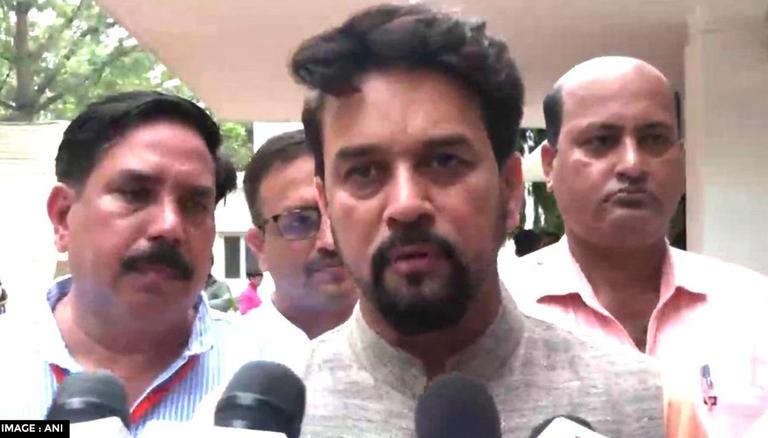 
A day after NDA Presidential candidate Droupadi Murmu was elected as the 15th President of India, Union Minister Anurag Thakur hailed the leader's victory once again. He further slammed the Opposition parties who were against Murmu's candidature, and made remarks that she represented an 'evil philosophy' and called them 'dirty'. The leader also urged the Opposition parties to cooperate in the Vice-Presidential election.

Speaking to the media, Anurag Thakur said, "I'd like to extend my good wishes to Droupadi Murmu on behalf of the BJP & the people of this country. A tribal woman got the opportunity to sit on the highest Constitutional position, which is a big achievement in the 75th year of Independence."

"Some people get so dirty in the vote bank politics that they don't think twice before making statements against a Presidential candidate. The opposition should cooperate in the upcoming Vice-Presidential polls. VP Venkaiah Naidu has benefitted the country and Rajya Sabha," he added.

On Thursday, Thakur congratulated Murmu on her landslide victory and said that it represented the progress of the nation. He further added that the President-elect has risen through the ranks despite hardships through her perseverance.

The National Democratic Alliance (NDA) candidate Droupadi Murmu on July 21 was elected as the 15th President of India. At the end of the third round of vote-counting, she had crossed the halfway mark of total votes. In the first round of voting of the MPs, Murmu received the support of 540 members of parliament (MP) while Yashwant Sinha bagged the votes of only 208. Thus, Murmu received a total vote value of 3,78,000 as compared to Sinha's 1,45,600. In the second round, ballots were counted for 10 states where Murmu secured 1,349 votes with a total vote value of 4,83,299, and Yashwant Sinha secured 537 votes with a total value of 1,89,876. In the third round comprising 1,333 votes, Murmu secured 812 votes and Sinha, 531. With the vote values thus accumulated, Droupadi Murmu earned 64 percent of the votes.

The Prime Minister will also host a farewell dinner for outgoing President Ram Nath Kovind on July 22 from 5:30 pm onwards at Hotel Ashoka in Delhi.