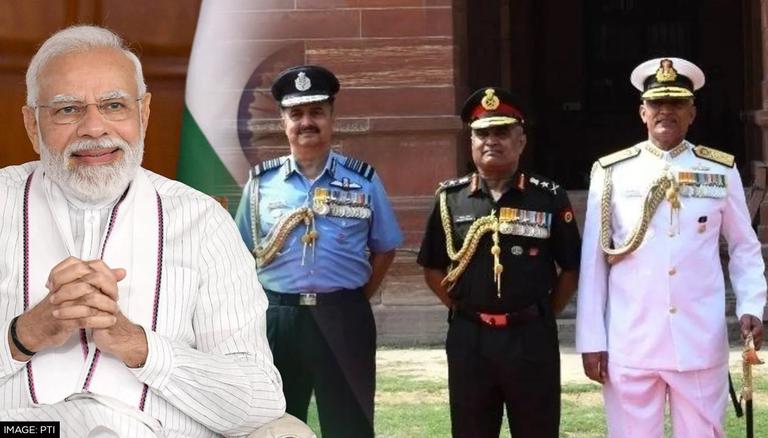 
Amid the ongoing controversy over the Agnipath scheme, Prime Minister Narendra Modi on Tuesday met the Chiefs of three Armed Forces - Army, Navy, and Air Force at his official residence to discuss the military recruitment programme. Republic TV has learned that the Navy Chief  Admiral R. Hari Kumar and Air Force chief Marshal Vivek Ram Chaudhari had arrived a little earlier and had a meeting with the PM for around half an hour. Army chief General Manoj Pande, however, later joined the meeting that concluded at 6.38 p.m.

This development comes a day after Prime Minister Narendra Modi cleared the air around the scheme, asserting that reforms may look unpopular at first, however, it helps the country in the long run. PM's remarks came while addressing a public event in Karnataka's Bengaluru. "Many reforms might look unpopular at first but the reforms will benefit the nation in long run. Reforms take us towards new targets and resolutions," PM Modi said on Monday at a public gathering in Bengaluru.

Earlier in the day, the Tri-Services held another press briefing to apprise about the rollout of the initiative. In the briefing, chaired by Lt Gen Anil Puri, Additional Secy, Dept of Military Affairs, it was clarified that the scheme will not alter the military recruitment process and that the regimental process will remain unchanged. "Aginpath scheme balances three things, the first youthful profile of the armed forces, technical savvy and adaptable people joining the Army, third makes the individual future-ready," said Lt Gen Anil Puri while briefing the media.

On June 19, Defence Minister Rajnath Singh had chaired a meeting on the Agnipath scheme at his residence with the Tri-Services chiefs in attendance. It was learnt that the meeting focused on ensuring a quick rollout of the 'Agnipath' scheme.

This comes in the backdrop of violent protests were reported across several states of India, including Bihar, Telangana, Uttar Pradesh, and others over the Agnipath scheme, with the protestors expressing concerns about job security and pension. Angry mobs protesting against the Centre's Agnipath yojana set trains on fire, vandalised railway stations and blocked roads.

Under the Agnipath scheme, Agniveers would be recruited on a short-term contract in the Army, Navy and Air Force. Under this scheme, almost 46,000 youth will be recruited in 2022 and the number of recruits is expected to go up by 5,000 every year.

Soldiers would be getting a monthly salary of around Rs 30,000-40,000. The recruitment is scheduled to begin in 90 days and beneficiaries will also be entitled to awards, medals, and insurance. Under the scheme, the first four years will not be taken into consideration for fixing the final pensionary benefits.

After four years, up to 25% could be retained or re-enlisted in the regular cadre based on merit, willingness, and medical fitness. The remaining 75% will be eligible for ‘Seva Nidhi’ packages of Rs 11-12 lakh and will be provided with skill certificates and bank loans for their second career.