'Terrorism Is A Vote Bank For Them': PM Modi Stings Congress Hard Ahead Of Gujarat Polls

PM Modi alleged that terrorism was at its peak in the country when Congress-led United Progressive Alliance (UPA) was at the Centre. 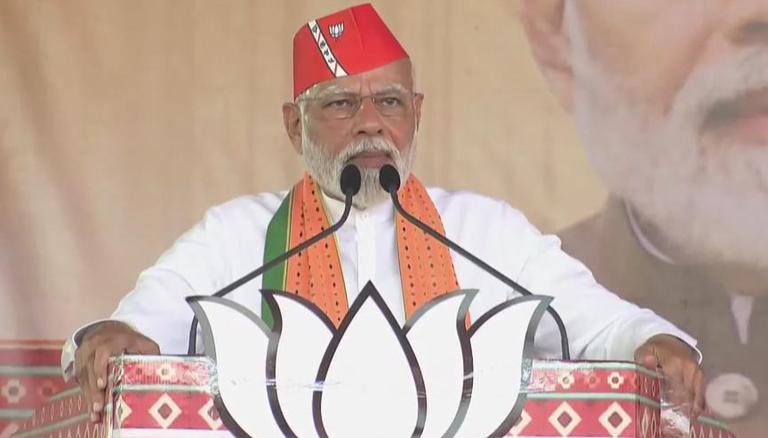 
Prime Minister Narendra Modi on Sunday targeted Congress and accused the party of supporting terrorism for 'vote bank' politics. PM Modi also alleged that terrorism was at its peak in the country when Congress-led United Progressive Alliance (UPA) was at the Centre.

Addressing a public rally in Kheda ahead of next month's Assembly elections in Gujarat, PM Modi said, "During the Batla House encounter, Congress leaders cried in support of terrorists. Even terrorism is a vote bank for Congress. It's not just Congress now, several such parties have risen, who believe in politics of shortcut and appeasement."

'When asked to target terrorism, they targeted me': PM Modi attacks Congress

The Prime Minister added, "Gujarat had for a long time been a target of terrorism. The people of Gujarat were killed in explosions in Surat and Ahmedabad. Congress was at the Centre then, we asked them to target terrorism but they targeted me instead. Terrorism was at its peak in the country."

He further told the people that their vote in the 2014 Lok Sabha election created a lot of difference in killing terrorism in the country. "Let alone the cities of the country, terrorists have to think a lot even before attacking our borders. But Congress questions our surgical strike."

Moreover, PM Modi said that the youth of Gujarat aged 25 years and below have never seen what a curfew looks like. "I have to save them from the bomb explosions, only BJP's double-engine government can do this."

The Assembly elections in Gujarat will be held on December 1 and December 5 and the votes will be counted on December 8. The main political parties in the fray are BJP, Congress, and Aam Aadmi Party.

READ | 'Was amazed to see it': PM Modi speaks about 'novel gift' from weaver on 'Mann Ki Baat'

Earlier in the day, PM Modi had accused the Congress of having no respect for the tribal community and said that it did not support the candidature of Droupadi Murmu in the presidential election held earlier this year.

"Congress has no respect for tribals in the country...We decided to make our tribal daughter (Droupadi Murmu) the president of the country. We went to Congress with folded hands to accept her (support her candidature), but they opposed it. We put all our might and made the tribal daughter win the election," Modi said.

READ | G20 presidency big opportunity for India, must utilise it for global good, says PM Modi
READ | 'Congress does not respect tribals, it did not even support Murmu in presidential polls': PM Modi
First Published: 27th November, 2022 18:41 IST
SUBSCRIBE TO US