New poster emerged on Thursday put up by Congress party, hitting out at Bihar Chief Minister Nitish Kumar for alleged promises made by the CM but not fulfilled.

The poster war in Bihar continues as the Assembly election is due in the state in October 2020. A new poster has emerged on Thursday, hitting out at Bihar Chief Minister Nitish Kumar. This time, Congress party joined the war and has purportedly put up the poster which seemingly points out what Congress claims are old promises made by the CM. The poster has a number of issues listed with a question mark, asking the CM about the alleged unfulfilled promises. 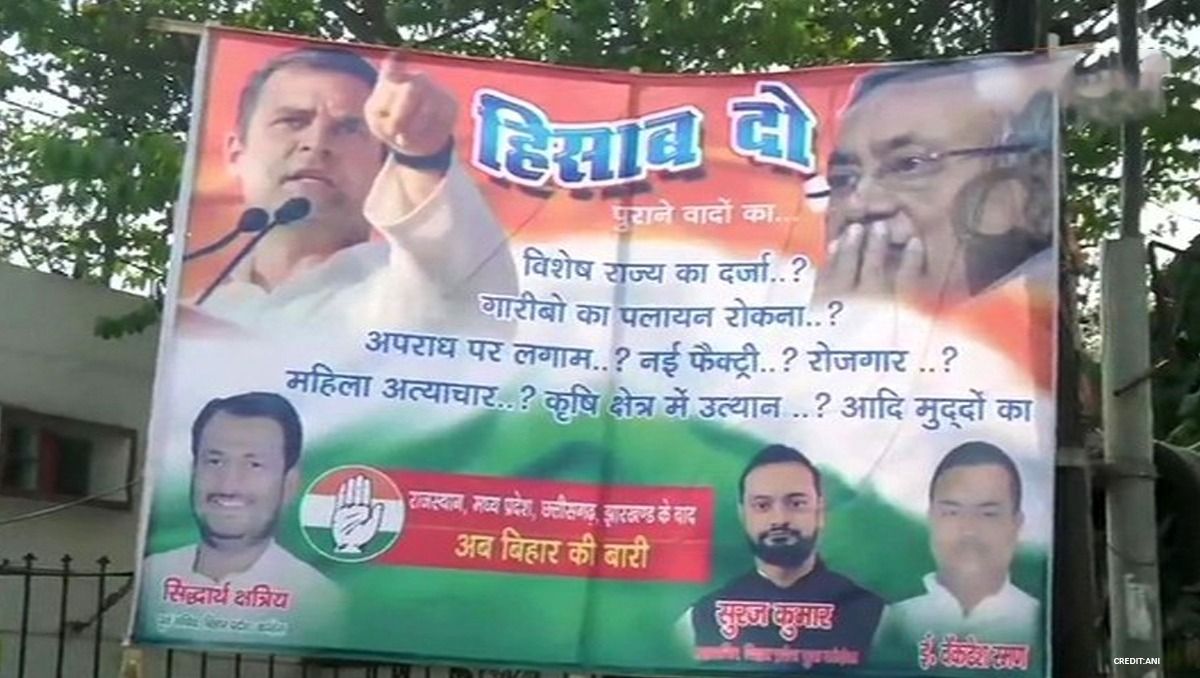 In a follow up of the long-running poster war between the Lalu Prasad Yadav led RJD and the Nitish Kumar led JDU in Bihar, the RJD had come up with a new poster against the Kumar led JDU-alliance accusing them of "drowning Bihar" with their faulty governance.

The poster in Patna shows caricatures of Chief Minister Nitish Kumar and Deputy Chief Minister Sushil Modi sitting on a chair tied with a rope with one end of the rope in Sushil Modi's hand. It shows the map of Bihar drowning in the water below their feet.

The poster was accompanied with a six-line poem titled 'kursi ke pyare, Bihar ke hatyare' (interested in only power, they are the killers of Bihar).

The poem accused the JDU of "looting" the people of Bihar in their "game" of power. It accused the Nitish Kumar-led government of exploiting the people and gifting Bihar corruption and unemployment. Earlier, the RJD had alleged Nitish Kumar and Sushil Modi of being involved in the Srijan scam and other corruption cases. The poster war between the two parties was initiated by JDU when they had put up pictures of a "vulture" depicting the RJD rule and pictures of Dove depicting the JDU rule.

Also, the JDU had come up with a poster of Lalu Prasad Yadav and Tejashwi Yadav running a train called "Corruption Mail", with pictures of Lalu and Tejashwi in the background. Each coach of the train depicted the corruption scams in which Lalu and Tejashwi were caught. With the Bihar Assembly Elections slated to be held in October 2020, the poster war between JDU and RJD continues to intensify.