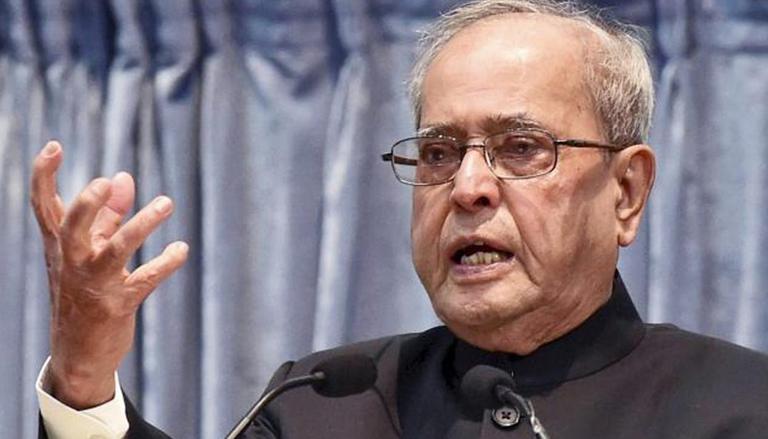 Union Minister for Housing & Urban Affairs, Hardeep Singh Puri wrote that the late President will be forever remembered 'for his contribution to public life & exemplary service to the nation'.

He will always be remembered for his contribution to public life & exemplary service to the nation. pic.twitter.com/gCaWxrE5QJ

My tributes to a towering statesman, “Bharat Ratna”, former President of India, Pranab Mukherjee Ji, on his death anniversary. pic.twitter.com/apIbKpA1cO

Assam Chief Minister and BJP leader Himanta Biswa Sarma remembered the former President and said his "contribution to the nation's progress" is "unparalleled'.

Paying rich tributes to former President of India, Swargiya Pranab Mukherjee on his punyatithi.
A statesman whose contribution to the nation's progress is unparalleled, he also immensely enriched the country's public discourse with his wisdom. pic.twitter.com/H0KSXu9x9n

Madhya Pradesh Chief Minister Shivraj Singh Chouhan tweeted saying, "Humble tributes to the former President of India, the revered Pranab Mukherjee ji on his death anniversary! He was an ajatashatru of politics. Every moment of his life was dedicated for the progress of the nation and society" in Hindi.

Goa Chief Minister Dr Pramod Sawant wrote that the former President will be remembered 'for his immense contribution to India'.

My humble tributes to Former President of India Bharat Ratna Pranab Mukherjee ji on his death anniversary. He will be remembered for his immense contribution to India. pic.twitter.com/hHUwq2iAr2

Pranab Mukherjee's son and All India Trinamool Congress (TMC) leader Abhijit Mukherjee wrote 'your absence is a void among us that can never be filled' for his late father.

Baba , Your life was a blessing , your memory a treasure , you are loved beyond words & missed beyond measure !
We remember you every day and your absence is a void among us that can never be filled !
🙏#PranabMukherjee pic.twitter.com/TmLxj7aIgI

Manipur CM N Biren Singh called the former President a 'political stalwart' and remembered him for 'his rich contributions to public service and the Nation'.

A towering statesman and a political stalwart, remembering his rich contributions to public service and the Nation. pic.twitter.com/xsTEpJtXFg

Rajasthan Chief Minister Ashok Gehlot also wrote about the successful political career of the late Pranab Mukherjee and described him as a 'statesman & politician, who contributed immensely towards nation’s progress serving in different capacities all his life'.

Remembering & paying my humble tributes to former President of India, veteran Congress leader Shri Pranab Mukherjee on his death anniversary. He was a statesman & politician, who contributed immensely towards nation’s progress serving in different capacities all his life. pic.twitter.com/NCitfetNzn

Pranab Mukherjee Legacy Foundation (PMLF) described the day as a 'solemn occasion' and wrote to embark upon 'a new journey to uphold his ideas and ideals'.

“Peace must be our ideology, progress our horizon”

On this solemn ocassion, PMLF embarks on a new journey to uphold his ideas and ideals. pic.twitter.com/mPHjRvyP4q

Pranab Mukherjee hailed from the small village of Mirati in Birbhum District of West Bengal and was born to freedom fighters, Shri Kamada Kinkar Mukherjee and Rajlakshmi on December 11, 1935. After acquiring a Master’s degree in History and Political Science and a degree in Law from the University of Kolkata, he became a college teacher and a journalist. Joining the Congress party, he was elected to the Rajya Sabha in 1969.

He rose when he was working in former Prime Minister Indira Gandhi's cabinet as he was made Deputy Minister, Industry, Shipping and Transport, Steel and Industry and Minister of State for Finance in 1973-74 during the Emergency. He was first made Finance Minister in 1982 in the Indira Gandhi cabinet and was Leader of the House in the Upper House of Parliament (Rajya Sabha) from 1980 to 1985. Later in his career, he was appointed Minister for Commerce 1993-1995, Minister of External Affairs from 1995-1996, Minister of Defence 2004-2006, Minister of External Affairs 2006-2009, Minister of Finance 2009-2012 and Leader of the Lok Sabha 2004-2012, till he resigned to be made President of India. He was awarded the Bharat Ratna- India's highest civilian honour in 2019.