Prashant Kishor Says BJP's Strategy Was 'stuck In Past'; Details TMC's Approach After 2019


Poll strategist Prashant Kishor opined that BJP did not account for the changes brought in by the Trinamool Congress (TMC) after the 2019 Lok Sabha elections and that they were 'caught on the wrong foot' for deploying the same strategy in hopes to fetch dividends. Speaking to Republic Media Network's Editor-in-Chief Arnab Goswami after Mamata Banerjee beat Suvendu Adhikari from Nandigram constituency, Prashant Kishor noted that BJP had not accounted for the organizational and leadership changes brought in by the TMC and termed BJP's strategy as something that was 'stuck in the past'.

Elaborating on what was the difference in Mamata Banerjee & TMC's campaign from 2019 and 2021, the poll strategist explained that the former was 'far more cognizant' of the fact that they had to deal with the BJP and that the saffron party posed a more serious threat to them than before. Prashant Kishor noted that an opponent must never be underestimated and claimed that certain quarters had attempted to miscontruct his opinion that PM Modi was popular in Bengal and that the BJP was a powerful party into the poll strategist conceeding defeat in the state.

"Acceptance of the challenge and knowing the strength of the challenger is not the weakness as being portrayed by many people. I pay a great deal of attention to the strength of my opponent. When we said that PM Modi is very strong in Bengal or that BJP is very strong political force, many people try to misconstruct it as me concerning BJP having an advantage in West Bengal,:" Prashant Kishor told Arnab Goswami. 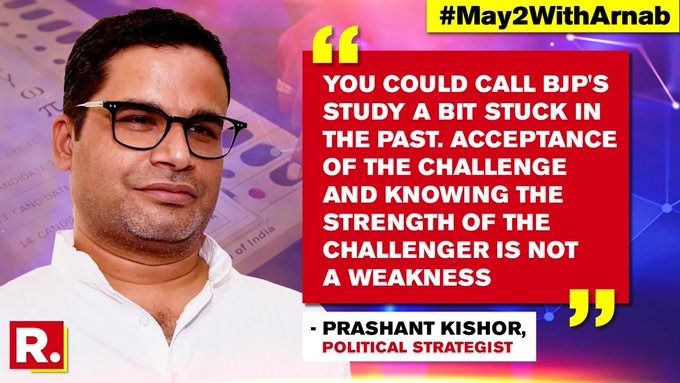 Prashant Kishor on Sunday, quit the 'political strategy space', inspite of keeping the BJP from winning 100 seats in West Bengal Assembly. Talking to Republic Media Network Editor-in-chief Arnab Goswami, Kishor said that he was elated that Mamata Banerjee has retained Bengal, but will take a break from being a poll strategist and decide his future. Kishor, who has political ambitions, hinted at joining some political party in the near future.

"I am quitting this space inspite of BJP not crossing 100 seats. It is time for me to hand it over to my colleagues of IPAC.  I am going to take a break and try something new. I won't be involved in day-to-day working of IPAC, will be available for assistance. I may join some party at some time," said Kishor.

TMC has stormed back to power in Bengal trouncing an emerging BJP on Sunday. As per EC's latest trends, TMC is leading in 213 seats, while BJP is leading in 77 seats. On the other hand, the Congress-Left-ISF combination has failed to win a single seat. While Independent candidates have won 2 seats, BJP ally AJSU has won 1 seat. The 294-seat Assembly battle has been close as the BJP aimed to break the final Bengal frontier.