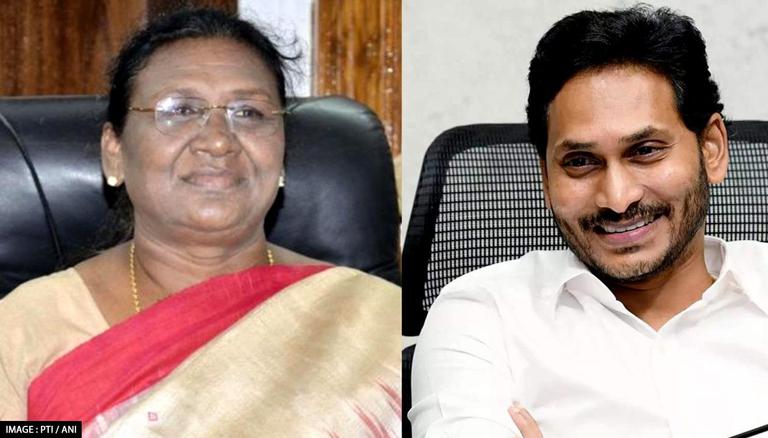 
Andhra Pradesh Chief Minister Jagan Mohan Reddy on Thursday extended support to NDA presidential candidate Droupadi Murmu, who will be the first tribal woman to hold the position if she wins the elections. As per an official statement, the Andhra CM said that it falls in line with the emphasis he has always given to the representation of the SC, ST, BC, and minority communities.

However, CM Jagan will not be able to attend the filing of nomination by Draupadi Murmu due to the previously scheduled cabinet meeting. Therefore, on his behalf,  party parliamentary affairs leaders Vijaysai Reddy and Lok Sabha member Midhun Reddy will be present.

Andhra Pradesh CM Jagan Mohan Reddy-led YSRCP welcomed the announcement of Droupadi Murmu as its candidate in the Presidential election. Taking to Twitter on June 22, YSRCP general secretary and Parliamentary Party leader Vijayasai Reddy agreed with PM's statement that Muurmu will prove to be a great president and extended his good wishes.

Hearty Congratulations to Smt Draupadi Murmu Ji on being nominated as a candidate for the Presidential Election by NDA. Hon’ble PM Sri @NarendraModi Ji rightly said that you will be a great President of our nation. Our best wishes to you, Madam. pic.twitter.com/D06u2QB8Aw

Earlier in the day, PM Modi met the NDA's presidential nominee Droupadi Murmu and said her nomination was well-received by all sections of the society across the country. He also appreciated her understanding of the core problems of India and her vision for the country's development.

"Met Smt. Droupadi Murmu Ji. Her Presidential nomination has been appreciated across India by all sections of society. Her understanding of grassroots problems and vision for India’s development is outstanding," said Prime Minister Modi.

Who is Droupadi Murmu?

Droupadi Murmu was born in 1958 and started her political career in 1997 when she was an elected councillor in the Rajrangpur district of Odisha and also became the vice-president of the Scheduled Tribes Morcha of the Odisha unit of the BJP in the same year. Prior to her political life, Droupadi used to be an honorary assistant teacher.

She has also served as BJP District President of Mayurbhanj from 2002 to 2009 and in 2013 again. She has been a two-time BJP MLA in Odisha and also served as a cabinet minister in the Naveen Patnaik-led state government, when it had an alliance with the BJP. Murmu was also the first woman governor of Jharkhand.

As far as her personal life is concerned, Murmu lost her husband and two sons earlier in her life. It is important to mention that she has two decades of experience working for the upliftment of the tribal community.

As the term of President Ram Nath Kovind is ending on July 24, an election to fill this impending vacancy will be held on July 18. The President will be elected by the Electoral College consisting of elected members of both Houses of Parliament and the Legislative Assemblies through a secret ballot. However, the nominated MPs and MLCs of various states are not eligible to participate in this election. The total value of the votes of electors is 10,86,431. While the last date for filing nomination papers is June 29, the counting of votes shall take place on July 21.