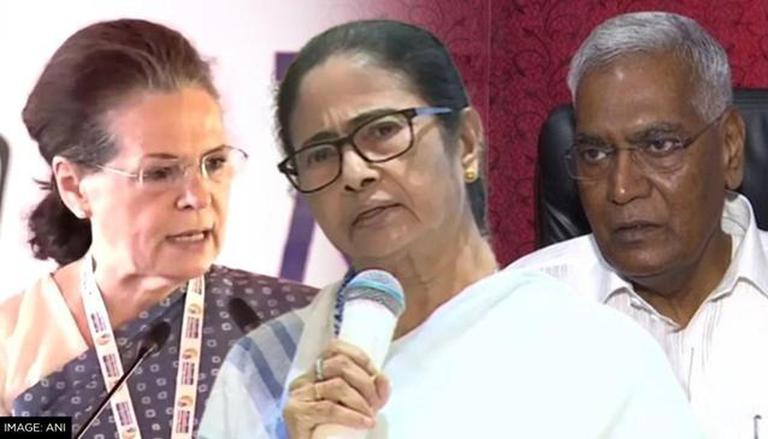 
Ahead of the Presidential elections 2022 schedule, West Bengal Chief Minister and TMC supremo Mamata Banerjee will hold a meeting for the opposition leaders in New Delhi on Wednesday, June 15. Communist Party of India (CPI) General Secretary D Raja on Tuesday stated that the Left parties are likely to attend the meeting convened by the TMC Supremo at Constitution Club to discuss the name of Opposition President candidates. Congress Senior leader Mallikarjun Kharge will attend the meeting as the representative of the grand old party. This meeting will also help unite the opposition parties and to prepare a joint strategy for the 2024 Lok Sabha polls.

"Left parties are likely to attend the meeting because all the Left parties want all secular democratic parties which are in opposition must remain United must move unitedly that is our concern and let us see how things are going to emerge tomorrow," D Raja told ANI.

On being asked about Congress wanting to propose NCP chief Sharad Pawar's name for the Presidential candidate, the CPI General Secretary said, "I don't know. You must ask the Congress party. If the Congress party wants, then the Congress party will have to explain. As of yet, Congress has not told me on this matter or left parties. I do not know that's why I am saying who is going to be the candidate? or what the other parties are thinking? Nobody knows."

Just days ahead of the Presidential elections, the Opposition's top two choices - Sharad Pawar and Nitish Kumar have opted out of the race to become the next President. While Bihar Chief Minister Nitish Kumar made it official on Monday that he has no desire to occupy the highest constitutional post, sources have told Republic TV that NCP supremo Sharad Pawar has also pulled out of the crucial race.

Notably, the Bhartiya Janata Party (BJP) has authorized its National President JP Nadda and Defence Minister Rajnath Singh to consult with other political parties regarding presidential polls. The two leaders will interact with the ruling National Democratic Alliance (NDA) and the opposition United Progressive Alliance (UPA) constituents, besides other parties in the presidential elections.

The Presidential polls for electing the next President of India will be held on July 18, 2022. During the polls, 4,809 electors comprising MPs and MLAs will vote to decide on the successor to incumbent President Ram Nath Kovind, whose term ends on July 24. Chief Election Commissioner Rajiv Kumar has informed that the notification for the election will be issued on June 15 and the last date for nomination will be June 29. The voting will be carried out on July 18 and the counting of the votes will be held on July 21.