PM Modi acknowledged the parties which extended support to NDA's presidential candidate Droupadi Murmu & thanked them for honouring her merits. 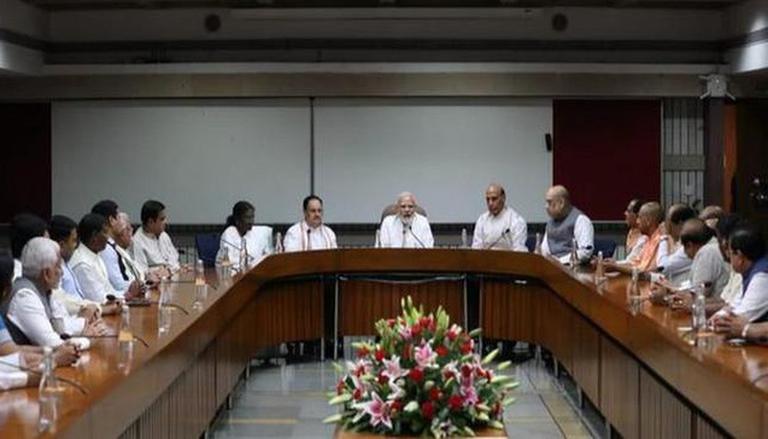 
Prime Minister Narendra Modi on Friday acknowledged the parties which extended support to NDA's presidential candidate Droupadi Murmu and asserted that the only ideology of the President is the "Constitution of India", according to ANI.

Addressing the leaders of the NDA and parties that decided to extend support to the Presidential candidate, PM Modi expressed his gratitude for their decision to “honour the merit” of Droupadi Murmu, ANI reported. During the meeting, PM also spoke about Murmu's life struggles as well as her merit of serving in various positions including as the governor of Jharkhand in the past.

"The Prime Minister told us about a conversation with Murmu wherein she had spoken to him about her unspent pension which she was determined to use for the public which she used to build a school which is an example of her simplicity and commitment towards development and education," those aware of the developments in the meeting told ANI. According to the agency, sources revealed that Murmu was not even aware her name was going to be announced and she learned through the TV when BJP national President JP Nadda declared her as the NDA's presidential candidate.

Furthermore, PM Modi informed the leaders that BJP had spoken to the opposition as well as other political parties and that a consensual choice for the role of President of India would have been appropriate.

'President of India's only ideology is Constitution of the county': PM Modi

Speaking on the impending the Presidential election and Droupadi Murmu's candidature, PM Modi said that the election will be contested if necessary, and it is recognised that mathematics will ultimately prevail, but for a candidate of this calibre, it is only in the national interest that it be a unanimous choice.

"Whether the result is 70:30, 60:40 or even 100:0, every election where a win is secured is a win because it is the respect of the people’s mandate... In any election, even if political parties have an agenda or a different ideology, here it does not really matter. For the President of India, his or her only ideology is the Constitution of the country," PM Modi said according to ANI reports.

'Will reach out to opposition parties again': PM Modi

During the meeting, the leaders were also briefed by Prime Minister Modi that his party will once more make reach out to the opposition parties in the hopes that they would respect the election of the nation's highest constitutional body and, in this instance, vote unanimously.

"This is in a true sense will be the best example of women empowerment and the empowerment of the most ignore strata of society," PM Modi said, according to ANI. It is pertinent to mention that Droupadi Murmu herself has reached out to the political leaders of the opposition including TMC chief and West Bengal CM Mamata Banerjee, Congress interim president Sonia Gandhi as well as NCP supremo Sharad Pawar.

Notably, the opposition parties have fielded former Union Minister Yashwant Sinha as their candidate for the upcoming presidential election which is slated to take place on July 18 and the results will be out on July 21.