Puducherry: Nomination Of 3 BJP Members To Assembly Upheld By Madras HC Amid Controversy

The Madras High Court on Wednesday dismissed a petition against the Centre's notification regarding the nomination of three members to the Puducherry Assembly. 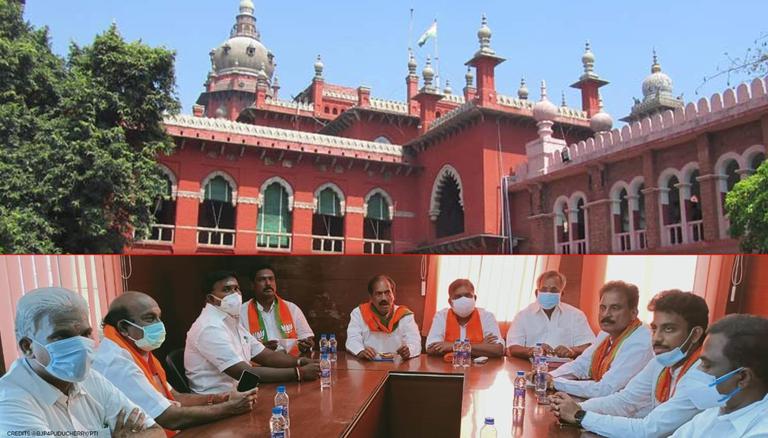 
The Madras High Court on Wednesday dismissed a petition against the Centre's notification regarding the nomination of three members to the Puducherry Assembly. Even as Puducherry CM N Rangasamy was recuperating from COVID-19 in a hospital, K Venkatesan, V P Ramalingam, and R B Ashok Babu were nominated to the Assembly by the Centre. While Venkatesan, a former DMK MLA and Ramalingam, an ex-Congress functionary joined BJP just before the recent Assembly election, Babu is a functionary of the saffron party.

Contending that they do not have a "good background", the petitioner maintained that there was no urgency to have nominated members at a juncture when the MLAs had also not been sworn in. Observing that the nominated members do not attract the specific statutory disqualifications, the division bench of Justices Anita Sumanth and Senthilkumar Ramamoorthy held that their affiliation to BJP is not a relevant consideration. Weighing in on the "undue haste" in nominating the three members, it opined that this was a matter of propriety rather than legality.

In its order, the HC stated, "Undue haste has been ascribed to the nomination, seeing as the Chief Minister had tested positive for COVID-19 and had been admitted in the hospital and the Legislative Assembly and Cabinet had not been sworn in/constituted at the time when the nominations were made. This is more a challenge to propriety rather than one of law. In law, we do not find any specification in the statute stipulating the timing of the nomination and the candidates, once nominated, would take their seats in the Legislative Assembly as and when the Assembly is sworn-in."

The polling for the 2021 Puducherry Assembly polls was held on April 6 with an impressive voter turnout of 81.69 per cent. While Congress was reeling from the toppling of the V Narayanasamy-led government, the AINRC was seeking a comeback bolstered by its alliance with BJP. The election results threw up an interesting outcome with BJP opening its account in the Assembly as 6 of its candidates emerging victorious. Though AINRC managed to bag 10 seats, Rangasamy could win only one of the two seats he contested in the election. On the other hand, DMK and Congress secured victory in 6 and two constituencies respectively.

In a first, 6 Independents got elected to the Puducherry Assembly. While NDA comfortably formed the government, speculation is rife that BJP is demanding a large share of the Ministries. This is because the nomination of three MLAs has propelled its strength to 9 members. Moreover, Independent MLA Gollapalli Srinivas Ashok who trounced the AINRC chief from Yanam has also extended his support to BJP. Thus, BJP and AINRC are virtually neck-to-neck in the 33-member Assembly with 10 seats each. While the opposition has claimed that the saffron party is seeking to foist its own CM, BJP has denied with AINRC.