The Punjab government came under fire on Thursday for selling COVAXIN doses procured at Rs.420 per dose to multiple private hospitals for Rs.1060 per dose. 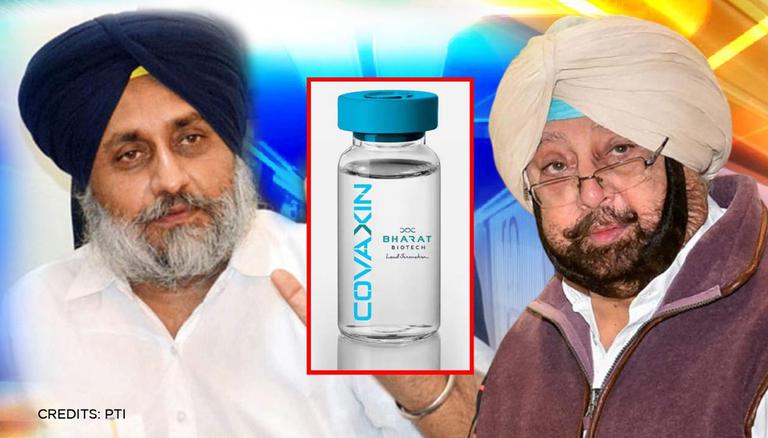 
The Punjab government came under fire on Thursday for selling COVAXIN doses procured at Rs.420 per dose to multiple private hospitals for Rs.1060 per dose. Directly acquired by the state government for people aged between 18 and 44 having co-morbidities, for construction workers and families of healthcare workers in government vaccination centres, the private hospitals are reportedly administering the doses to all adults at Rs.1560 each. Describing this as a "scam", Shiromani Akali Dal chief Sukhbir Singh Badal demanded a High Court probe.

Addressing a press briefing, Badal claimed that vaccines were being diverted to private players at hefty margins to create an artificial shortage. Calling for the resignation of Punjab Health Minister Balbir Singh Sidhu, he lashed out at the Congress government for playing with the lives of people. On this occasion, the Lok Sabha MP also said, "Vini Mahajan should also not act like a market salesman for private institutions by encouraging people to get vaccinated at inflated rates".

Alleging that a common man is being forced to pay Rs.6000 to Rs.9000 for a single vaccine dose for his family, the SAD chief questioned ex-Congress president Rahul Gandhi over this party's hypocrisy as it has backed free inoculation. Taking umbrage at the entire COVID-19 management exercise, he stated, "It is immoral for Punjab govt to profit from the sale of #COVIDVaccines. People being punished during a time of economic slowdown. Cong govt has abdicated its resp towards public welfare by corporatizing vaccine distribution."

.@Akali_Dal_ demands a high court probe into diversion of vaccines to private players at hefty margins to create artificial shortage. Vaccines procured @ Rs 400 /dose sold to private hosp for Rs 1060 and are available to common man at Rs 1560. This is a scam @drharshvardhan.1/4 pic.twitter.com/g8QGqAimcG

The vaccines sold to private hospitals were a part of the 1.14 lakh COVAXIN doses which Punjab received on May 27. It is pertinent to note that the COVID-19 inoculation for the 18-44 age group is free in all Punjab government healthcare facilities. A total of 39,65,219 persons have been inoculated in the state whereas 7,84,099 of them have received the second dose of the vaccine too.

India opens up vaccination for all adults

From May 1 onwards, the Centre relaxed the age bar for COVID-19 inoculation and allowed the vaccine manufacturers to supply 50 per cent of its doses to state governments and in the open market. While some states managed to commence the vaccination for the 18-44 age category, the governments of Maharashtra, Delhi and Karnataka have suspended this drive owing to a paucity of doses. Special emphasis has been laid on those aged above 45 who are waiting for the second dose of the vaccine. So far, both Moderna and Pfizer have refused to supply vaccines to states emphasising they will deal only with the Centre.