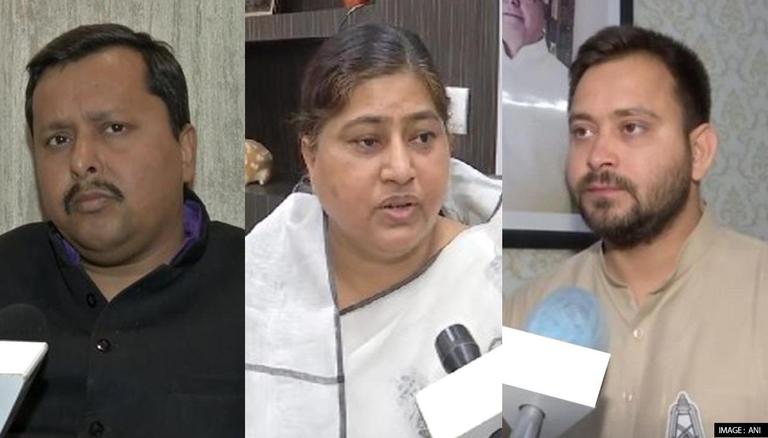 
Defending the govt JDU minister Nitin Nabin on Monday, said that the Nitish govt never spared any criminal when asked about his colleague Leshi Singh's involvement in Purnia murder case. Slamming Tejashwi Yadav for his criticism, Nabin claimed that it was RJD which had patronized criminals & kept them in their homes. A local journalist & ex-Zilla Parishad member in Purnia - Rintu Singh was shot dead in Sarsi PS area on Friday.

We worked on justice development model;didn't spare any criminal. I ask him to tell an incident where we protected criminals. We know how RJD patronized criminals & kept them in their homes: Bihar Min Nitin Nabin over Tejashwi Yadav's take on min Leshi Singh in Purnia murder case pic.twitter.com/ogFbIZieRX

As per reports, Rintu Singh alias Vishwajit Kumar was Congress Punia VP. He was shot dead on Friday by unknown assailants mere nine days after he narrowly escaped an attempt on his life. Rintu Singh had filed a complaint with the police claiming that on November 3, he was attacked while he was returning to Sarsi from Mirganj outside his own home. Naming one Ashish Singh - Leshi Singh's nephew, he claimed that Singh and his associates had shot at him while he was mere 50 metres away from his home. His kin have alleged that if local police had investigated into that incident in a timely manner, Rintu Singh would not have died.

Lashing out at the Nitish govt, Bihar LoP Tejashwi Yadav demanded why Leshi Singh was not made to resign yet. He urged CM Nitish Kumar to set a timeline of what action he would take against the minister, demanding JD(U)'s stance on the issue. The CM is yet to comment on the issue.

"Nitish Kumar's minister Leshi Singh-her nephew are accused. SHO has been suspended but when deceased's relatives are clearly accusing Leshi Singh & her nephew then why is state govt & its head silent? Nitish Kumar should set a time frame - if he is going to remove his minister (Leshi Singh), when will action be taken? How many women will become widows before Nitish Kumar wakes up?," said Tejashwi Yadav.

Congress too lashed out at the Nitish govt pointing out that three young political workers had been killed in the recent days. Listing the murder of former district councilor & Purnia Congress VP Vishwajit Kumar, social worker Naveen Kumar Jha in Seohar and RTI activist Avinash Jha at Madhubani, the party slammed the BJP-JDU govt's laxity. 'There is no such thing as law and order in Bihar under the BJP-JDU government', stated Congress.