Rahul Gandhi and other Congress leaders like Charanjit Singh Channi, Bhupesh Baghel were asked to visit Lakhimpur Kheri in the Police convoy by the UP Police 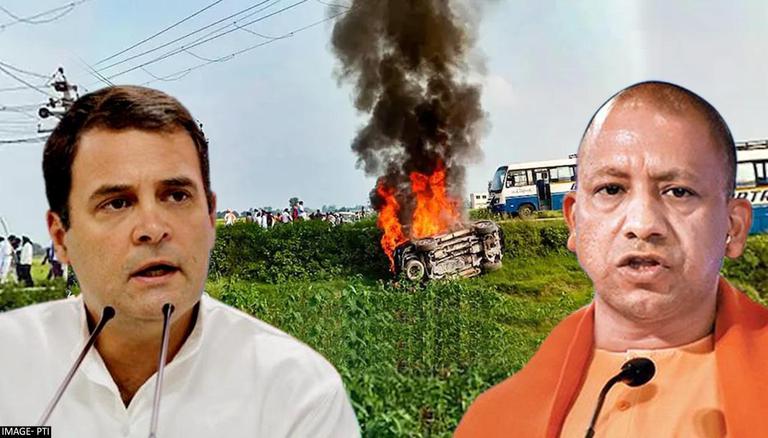 As soon as Rahul Gandhi and others landed at the Lucknow airport, they were asked to visit the site using the Police convoy, however, the Congress leaders wanted to go to the site in their own vehicles. While the UP Police attempted to explain to the Congress leaders that the arrangement had been made to ensure smooth traffic, Rahul Gandhi said that he did not want any government vehicle and instead wanted to travel by his own vehicle. During the argument, Punjab CM Charanjit Singh asked the police if they were going to be arrested or detained.

#WATCH | Congress leader Rahul Gandhi asks police officials at Lucknow airport "under which rule are you deciding how I'll go? Just tell me the rule."

"We want to go in our car (to Lakhimpur Kheri) but they (police) want to take us in their vehicle. I asked them to let me go in my personal vehicle. They are planning something. I'm sitting here," said Rahul Gandhi.

#WATCH | At Lucknow airport, Congress leader Rahul Gandhi says, "What kind of permission I have been granted by UP Govt? These people are not letting me go out of the airport."

READ | Rahul Gandhi firm on Lakhimpur visit today despite UP govt's snub; 2 CMs to accompany him

"On behalf of Chhattisgarh Govt, I announce Rs 50 lakhs each for the families of the farmers and the journalist who died in the violence (in Lakhimpur Kheri)," announced Bhupesh Baghel.

What happened at Lakhimpur Kheri?

As per the FIR lodged by the UP police on Monday, farmers and labourers were peacefully protesting against Ajay Misra and Uttar Pradesh Deputy CM Keshav Prasad Maurya at the playground of the Maharaja Agrasen Inter College on October 3 by showing black flags. The complainant Jagjit Singh mentioned that three vehicles carrying Ashish Misra and 15-20 unknown persons drove towards the event venue in Banbirpur village at high speed at around 3 pm. He also claimed that Ashish Misra was sitting on the left seat of his Mahindra Thar vehicle, fired at protesters and proceeded ahead by running over farmers.

Alleging that two farmers succumbed to bullet injuries, the complainant added that Ashish Misra's three cars turned turtle due to high speed which left many passersby injured. After this, he reportedly opened fire again and fled the spot. Lamenting that no action was taken against the Union MoS Home for allegedly threatening farmers, the FIR claimed that this was a "pre-planned conspiracy" by Ajay Misra and his son. However, Ajay Misra and his son have flatly denied these charges claiming that they were not present at the site.

WE RECOMMEND
Rahul Gandhi firm on Lakhimpur visit today despite UP govt's snub; 2 CMs to accompany him
'UP is mourning..,' says Akhilesh Yadav over Lakhimpur, avers 'not the time for festival'
Punjab CM compares Lakhimpur with Jallianwala Bagh; ‘Those who massacred roaming free'
Lakhimpur violence: Cong leader Sachin Pilot en route to Sitapur by road from Delhi
Traffic slows at Delhi-UP border due to farmers’ protest, check alternate routes here