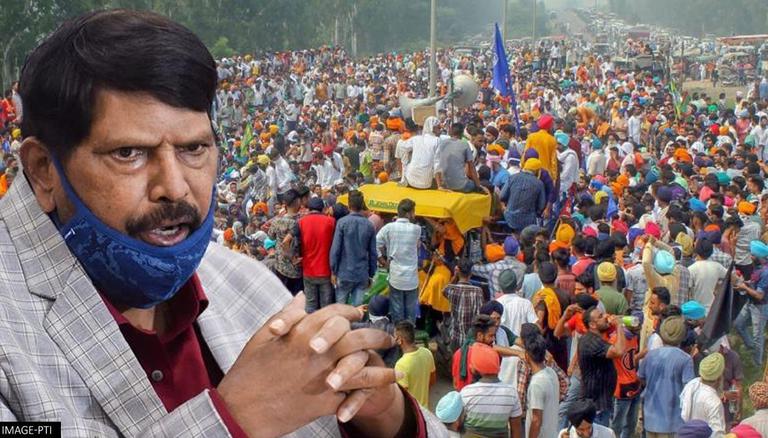 
Minister of State (MoS) for Social Justice and Empowerment Ramdas Athawale on Friday came down heavily on farmers who haven't were still protesting despite the Centre's decision to repeal the three farm laws. The Union Minister called for strict action against those who are not moving back to their homes.

"Farmer leaders were saying that till the law is not repealed they will not return home. When the Union Cabinet already approved the decision to repeal the laws, Rakesh Tikait and other farmer-leaders should end the agitation and go home. If they do not go back home, then strict action should be taken against them. It is my demand," Ramdas Athawale said.

Hundreds of farmers have been encamped at Delhi's Ghazipur, Tikri, and Singhu borders since November 26, 2020, with a demand that the Farmers' Produce Trade and Commerce (Promotion and Facilitation) Act, 2020, Farmers' (Empowerment and Protection) Agreement on Price Assurance and Farm Services Act, 2020 and the Essential Commodities (Amendment) Act, 2020 be rolled back and a new law made to guarantee MSP for crops.

Prime Minister Narendra Modi had last week announced that the Centre will be bringing necessary bills in the winter session of the parliament beginning on November 29 to repeal the farm laws. PM Modi has also declared that the government will constitute a committee to work on a new framework for Minimum Support Price (MSP).

Tikait to head Parliament on Nov 29

On the other hand, Bharatiya Kisan Union (BKU) leader Rakesh Tikait has said that 60 tractors will head to the Parliament in the National Capital on the first day of the winter session. A tractor march to press the statutory guarantee of minimum support price (MSP) for crops among others will also be taken.

Hundreds of farmers in tractors started arriving at Ghazipur on the Delhi-Uttar Pradesh border as Friday marked one year of the ongoing farmers' protest against the central laws. Many of them brought along vegetables, sacks of flour and lentils, spices and cooking oil on their tractor-trollies, saying they have come prepared for a long haul. Bhartiya Kisan Union (BKU), an influential farmers' union from western Uttar Pradesh, has been leading the charge at the Ghazipur border since November last year.

The Samyukt Kisan Morcha (SKM), an umbrella body of the farmer unions organised nationwide protests on Friday, November 26 to mark the anniversary of the agitation. Thousands reached the borders along with Delhi. Rallies at all the district headquarters jointly with the trade unions in Tamil Nadu were conducted. Members of the organisation said that they will be taking out tractor rallies in Raipur and Ranchi and protests in West Bengal.