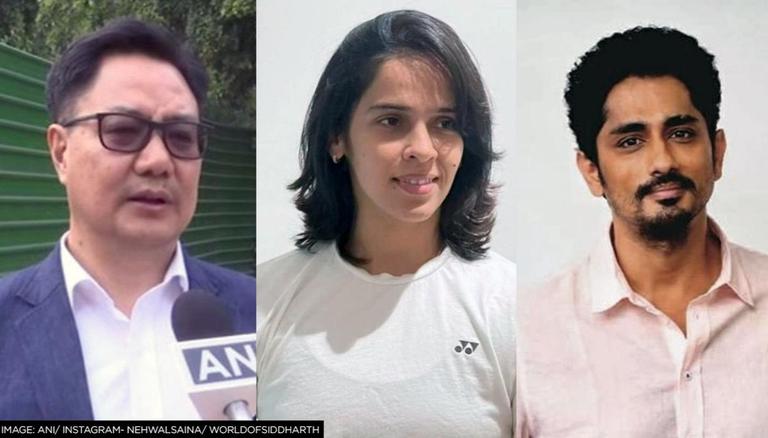 
Union Minister Kiren Rijiju came out in support of world-renowned shuttler Saina Nehwal after alleged crass and sexually derogatory slur was hurled at her by actor Siddharth on Monday. Taking to Twitter, the former Sports Minister said that India is proud of Saina Nehwal for her outstanding contributions in making the country a sporting powerhouse.

Hailing the Olympic medalist for being a steadfast patriot, Rijiju said that the cheap comment (by Siddharth) on such an icon like Saina depicts his 'ignoble mentality'.

India is proud of @NSaina for her outstanding contributions in making India a sporting powerhouse. She is a steadfast patriot besides being an Olympic medalist 🇮🇳
Making a cheap comment on such an icon personality depics a person's ignoble mentality. https://t.co/L4yV3xdRuh

Actor Siddharth has been receiving severe backlash for his alleged lewd and sexist remark against Saina Nehwal in response to her tweet on PM Modi's recent security breach in Punjab.

Reacting to the lapse in the Prime Minister's security on January 5, Nehwal had tweeted, "No nation can claim itself to be safe if the security of its own PM gets compromised. I condemn, in the strongest words possible, the cowardly attack on PM Modi by anarchists. #BharatStandsWithModi #PMModi (sic)."

READ | Saina Nehwal responds to Siddharth's sexist jibe; 'Used to like him as an actor but...'

However, Siddharth criticized Saina's concern and hurled derogatory remarks to humiliate the badminton star. Siddharth wrote, "Subtle cock champion of the world... Thank God we have protectors of India Shame on you #Rihanna."

Expressing shock over the actor's tweet, several users on Twitter dubbed it sexist, crass, and misogynistic. Several members of the sports fraternity came out in support of Nehwal after the incident. Cricketer Suresh Raina said sportspersons give 'their sweat and blood for their nation' and said that such 'loose language' being used against India's 'pride and sports icon' was sad.

"As an Indian sportsperson and as a human being, I stand with Saina and condemn the disgusting language in the tweet," he said. Meanwhile, Saina Nehwal spoke exclusively to Republic and pointed out that she used to like the actor but the remark he made against her was "not nice".

She said, "I’m not sure what he meant. I used to like him as an actor but this was not nice. He can express himself with better words but I guess it’s Twitter and you get noticed with such words and comments. If the security of the PM of India is an issue then I’m not sure what is secure in the country."