RJD national vice-president Raghuvansh Prasad Singh, on Saturday, said that the formula to defeat the BJP is for all anti-BJP parties to come together

Commenting on the collapse of BJP in Maharashtra, RJD national vice-president Raghuvansh Prasad Singh, on Saturday, said that the formula to defeat the BJP is for all anti-BJP parties to come together while talking to ANI. He added that as of now the BJP retained power solely due to cracks among Opposition parties. He said that the recent implementation of the formula which was witnessed in Maharashtra must be implemented in Bihar too.

Raghuvansh Singh: Nitish will return to the anti-NDA front

"Wherever anti-BJP forces come together, we will defeat the BJP. Due to internal cracks between us (anti-BJP parties), BJP keeps saying that they are strong. That formula was implemented in Maharashtra, should be implemented here also. If it is implemented throughout the country, BJP will be finished," he said.

Slamming the BJP's tactics in Maharashtra, he said that the saffron party was finished when Shiv Sena pulled out of the alliance. Taking a jibe at BJP chief Amit Shah, he asked what did the 'Chanakya' do? He also stated that there was no other option other than a JD(U)-RJD alliance.

"Till anti-BJP parties clash among themselves, BJP will rule." When asked about the Sena-BJP alliance, "They were together till now, but now that they (Shiv Sena) left, BJP was finished. Wasn't Amit Shah hailed as Chanakya? What happened? They won only 105 seats. This is the formula." When asked will RJD-JD(U) come together, he said, "There is no other solution."

Unfortunately, his words fell on deaf ears, as RJD leader Tejashwi Yadav took to Twitter on Sunday, to slam CM Nitish Kumar for his undecided stance on NRC. He stated that Kumar had no principles, thought or justice. He alleged that Kumar's consciousness itself was unaware when Nitish Kumar will flip due to his hunger for power. 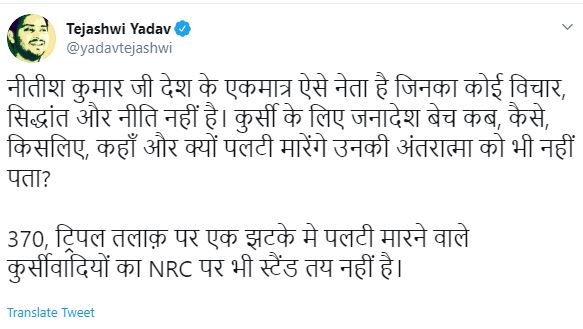 The 243-seat Bihar State Assembly will go to polls in 2020. In general elections 2019, the JDU won 16 out of the 40 seats and its alliance partners BJP and LJP won 17 and 6 respectively. While the RJD has reached out to JD(U) to rebuild the Mahagathbandhan, the JD(U) has maintained that it will fight the state polls with the BJP. Currently, the ruling alliance holds 130 seats while the RJD-Congress opposition holds 111 seats.