The BJP and the RSS are trying to "break" the composite culture of Jammu and Kashmir, and "assault" the brotherhood that exists among people of the Union Territory, Congress leader Rahul Gandhi said on Friday. 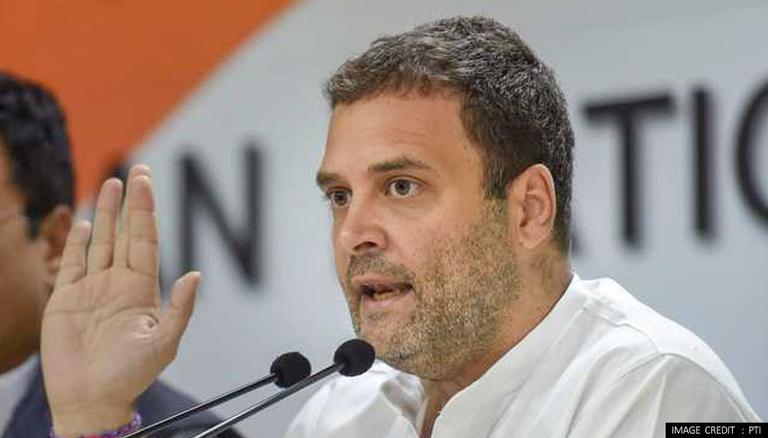 
The BJP and the RSS are trying to "break" the composite culture of Jammu and Kashmir, and "assault" the brotherhood that exists among people of the Union Territory, Congress leader Rahul Gandhi said on Friday. He also attacked the central government over the farm laws and demonetisation issues.

"The feeling of love, brotherhood and composite culture exists among you all. I feel sad that the RSS and the BJP are trying to break this composite culture," Gandhi said while addressing Congress office-bearers and workers at a party function here on the last day of his two-day visit to Jammu.

He also said that the brotherhood and love that "exists among you is under assault from the RSS and the BJP". "They attack love and brotherhood among the people and as a result, they took away your statehood," Gandhi said, adding that it has already been seen how economy, tourism and businesses have been hit.

On August 5, 2019, the Centre had abrogated the special status of Jammu and Kashmir and bifurcated it into Union Territories of Jammu and Kashmir, and Ladakh. "I went to the Mata Vaishno Devi shrine yesterday. There are three symbols of the mata (pindis) there - Mata Durga, Mata Lakshmi and Mata Saraswati," Gandhi said.

Goddess Durga symbolises the power that protects, Goddess Lakshmi gives the power to achieve and Goddess Saraswati symbolises education and knowledge, he said. "But we saw how decisions like demonetisation, farm laws and Goods and Services Tax dwindled the force of Goddess Durga. How appointment of RSS-affiliated people in schools and colleges in the country has negatively impacted Goddess Saraswati as a force," the Congress leader said.

"The Congress through schemes like the Mahatma Gandhi National Rural Employment Guarantee Act and achieving nine per cent growth only added to the force of Lakshmi. I fail to understand what is happening now?" he said.

The economic policies and decisions of the central government have "decreased" the power of the goddesses, the Congress leader claimed. "When these three shaktis are in your home and country, your home and country will make progress," he said. Gandhi also alleged that when a person from the RSS or the BJP is appointed in educational institutions, then the power of Goddess Saraswati diminishes.

Pointing towards his hand, Gandhi co-related the Congress election symbol with Lord Shiva and Guru Nanak Dev, and said it was the symbol of being fearless. "This hand is the symbol that you should not be afraid of anything," Gandhi said, adding that the "BJP is afraid of everything".

The Congress leader asked workers to strengthen the party and exhorted the gathering to chant 'Jai Mata Di'. Congress leader Gulam Nabi Azad termed Jammu and Kashmir as a symbol of composite culture. "Jammu is the face of entire Jammu and Kashmir and a symbol of compositeness as people from all areas of the erstwhile state have houses in Jammu," he said The leader also claimed that all development claims by the government are hollow and have no base at all. The party's Jammu and Kashmir president Gulam Ahmed Mir also asked the gathering to chant 'Jai Mata Di' as a way to bless Gandhi for his journey to the post of prime minister.

He said that this journey has started with his pilgrimage to the cave shrine of Mata Vaishno Devi. Azad said that the darbar move practice was scrapped and it has badly hit the economy of Jammu. He alleged that unemployment has increased and the tourism sector is facing a huge setback. "People are not getting basic amenities like water and electricity," Azad said.