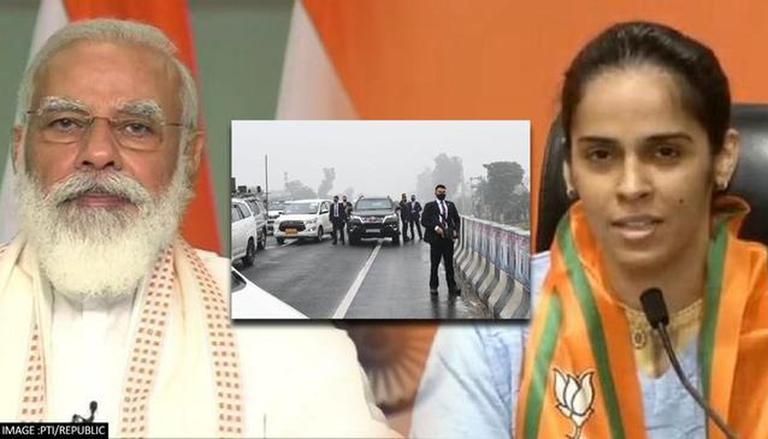 
In a major security lapse witnessed in Prime Minister Narendra Modi's visit to poll-bound Punjab, his convoy on Wednesday was stuck for 15-20 minutes due to a road blockade in the state. After the major security breach, badminton star Saina Nehwal has spoken out against the incident saying that a nation cannot claim to be safe if the security of its own Prime Minister is compromised. She also condemned what she called a "cowardly attack" on Modi by "anarchists".

No nation can claim itself to be safe if the security of its own PM gets compromised. I condemn, in the strongest words possible, the cowardly attack on PM Modi by anarchists.#BharatStandsWithModi #PMModi

Nehwal had joined the BJP about two years back. She had praised PM Modi along with the BJP and said that he and the party had done "a lot of good" for the country. She had also added that she would do her bit to help improve the sporting aspects in India.

The Prime Minister was travelling by road as the weather was not conducive to take a flight to Ferozepur where he was to lay the foundation stone of projects worth more than Rs.42,750 crore including the Delhi-Amritsar-Katra Expressway, four-lanes of Amritsar-Una section, Mukerian-Talwara New Broad Gauge railway line, PGI Satellite Centre at Ferozepur and two medical colleges at Kapurthala and Hoshiarpur. At Ferozepur, an announcement was made on the stage that his visit was postponed  "due to some reasons", not specifying the security lapse.

As per reports, around 400-500 protesters belonging to BKU Krantikari (Phool) sat on the flyover near village Piareana in the Ghall Khurd tehsil of Ferozepur district. The farmers' union is a part of the Samyukta Kisan Morcha (SKM), which spearheaded the yearlong protests against the now-repealed farm laws at the borders of Delhi. The protest was reportedly organised to stop BJP supporters from reaching the venue for a planned rally that the Prime Minister was scheduled to address in Ferozepur.

Notably, the Congress party had reflected strong opposition to the Prime Minister's visit to Punjab in a series of tweets. There were two photos embedded with the caption "Go back Modi" and demanded an apology for the death of farm protestors last year. The Ministry of Home Affairs, taking cognisance of this serious security lapse, has sought a detailed report from the state government. The Punjab government has also been asked to take responsibility for this lapse and take strict action.