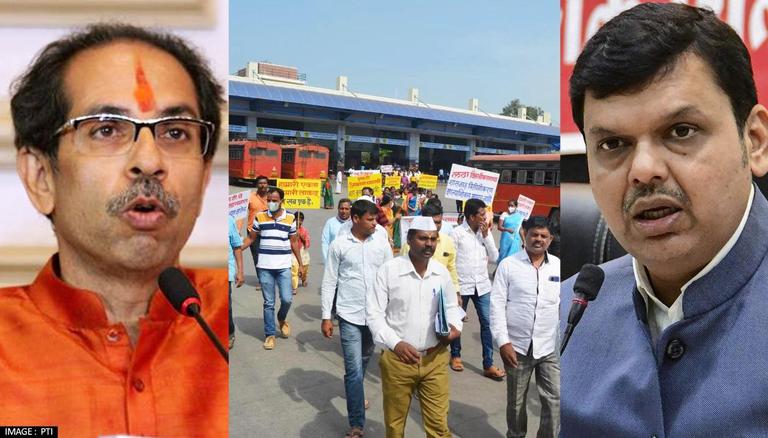 
As Maharashtra State Road Transport Corporation (MSRTC) employees' strike continues for the third consecutive week, Shiv Sena on Friday, slammed the BJP for prolonging the strike inspite of most demands being met. Claiming that the intervention of the courts had helped in starting discussions to fulfill other demands of the protesting unions, Sena via its mouthpiece Saamana, slammed the violent turn the protests have taken. MSRTC employees are striking, paralysing the state-run bus services.

Sena claimed that the spurt of violent incidences across bus depots in Maharashtra was BJP's failure. Claiming that the govt was not attempting to break up protests, Sena asked BJP 'What do you want to achieve?'. Sena asked if the 2293 MSRTC employees were asked to justify their absence from work were fired, would BJP fund them via 'PM cares fund'. Stating 15,000 employees had returned to work, Sena said this number will gradually increase.

Why are MSRTC staff striking?

All 250 bus depots of the MSRTC have been shut since November 9 as the unions demanded the merger of MSRTC with the state government. MSRTC had said last week that despite accumulated losses of Rs 12,000 crore, it paid the salaries for the last 18 months. It also fulfilled other demands such as increase in the dearness allowance, house rent allowance and Diwali gifts for the employees, it said. Ordinary commuters are suffering and the MSRTC is losing Rs 15 to 20 crore every day due to the strike, stated MSRTC.

READ | 2 attempt suicide near Maha secretariat in support of MSRTC employees' stir; held along with 4 others

MSRTC employees started an indefinite strike from October 28 over their demand of merger of the corporation with the state government and that hey be treated as state government employees. The Bombay High Court has rapped the MSRTC employees for their "adamant stand" of not withdrawing their strike despite the Maharashtra government extending full cooperation and setting up a panel to address their demand of merger of the MSRTC with the state government. The MVA govt has issued orders to striking employees to join duty under the threat of loss of pay. The MSRTC is one of the biggest state transport corporations in the country with a fleet of more than 16,000 buses and around 93,000 employees, including drivers and conductors.