Sena Seconds RSS Chief's Crackdown On Drugs; Taunts 'But Who Is In Power At Centre?'

Seconding RSS chief Mohan Bhagwat's statement on spread of drugs, Shiv Sena MP Sanjay Raut on Friday, said that it had significance, added 'Who is in power?' 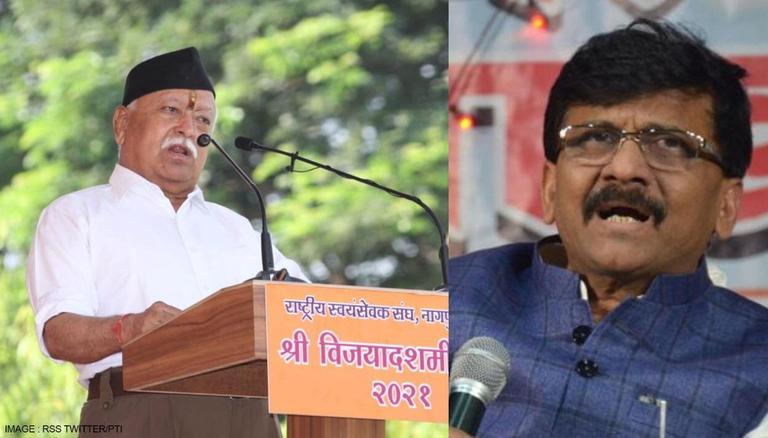 
Seconding RSS chief Mohan Bhagwat's statement on spread of drugs, Shiv Sena MP Sanjay Raut on Friday, said that it had significance. But, he added that if narcotics money was used against India, he blamed the BJP asking, 'who is heading the govt?'. Citing PM Modi's promise to stop terrorists, drugs mafia via demonetisation, Raut took a jibe at the saffron party.

Sena: 'It is significant'

"If he says something, it has significance. But if narcotics' money is being used against nation, who is heading the govt?.The PM had said that money to terrorists, drugs mafia will stop with demonetisation," taunted Raut. Like the RSS, Shiv Sena will be holding its annual Dussehra rally this evening and party Supremo Uddhav Thackeray will address Sena workers at the Shanmukhananda auditorium.

If he says something, it has significance, but if narcotics' money is being used against nation, who is heading the govt?...The PM had said that money to terrorists, drugs mafia will stop with demonetisation..: Shiv Sena's Sanjay Raut on RSS chief Mohan Bhagwat 'narcotics' remark pic.twitter.com/Hc2w1cXp2j

Addressing the annual Vijayadasami rally in Nagpur, RSS chief Mohan Bhagwat on Friday, urged political parties to set aside ideological differences for the betterment of society. Slamming parties for ruining society for political reasons, he said that governments should not have different ideologies like political parties. With the rise in drug raids by NCB, Bahgwat said that use of narcotics is rising, which should be controlled.

READ | 'Sena will be in first position in Centre in 2024', says Raut ahead of Dussehra rally

He said "Not everyone works on making society work properly. Be it people in states and in Centre, there are people in charge of making the nation work, who are ruining society. That too for their own political selfishness. Governments should not have different ideologies like political parties. With modernisation, we are losing  (character) it.

Batting for regulation in OTT platforms, he said, "There's no control over what's shown on OTT platforms, post Corona even children have phones. The use of narcotics is rising, how to stop it? Money from such businesses is used for anti-national activities. All of this should be controlled". The annual Vijayadasami address by the RSS chief sets the future course for the organisation in the coming year. Attendees included top RSS leaders like Dattatreya Hosabale and former pracharaks - Nitin Gadkari and Devendra Fadnavis.

Raut: Sena will occupy the highest position in 2024

Setting the stage for Shiv Sena's fiery Dussehra rally, party MP Sanjay Raut on Thursday, proclaimed that Shiv Sena will occupy the highest place in the Centre in 2024. Vowing to 'burn the Ravana of fuel prices', he said that this demon will be burnt completely in 2024 - setting up a showdown with the BJP. Sena and BJP fell out over post-poll power-sharing in Maharashtra.

Speaking to a local Marathi new channel in Mumbai, Raut said, "In 2024, the politics of the country will have completely changed. You will see a different sun shining in national politics. Your money, your terror, your deception will not work in 2024. In 2024, Shiv Sena will have the highest position in the Centre and will be an important front in national politics".