Shiv Sena workers did a sit-in protest outside the residence of Sanjay Raut, against the raids conducted by ED in the Patra Chawl land scam case 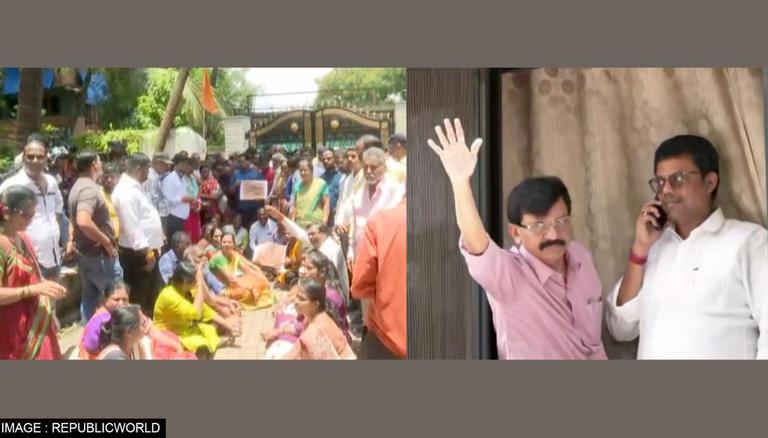 A close confidante of the former CM of Maharashtra Uddhav Thackeray, Sanjay Raut also waved to his party workers, who were present in large numbers outside his residence, conducting protests against the action by ED. Notably, Sanjay Raut skipped ED summons four days ago and did not submit himself for questioning.

ED reached Raut's home at 7 a.m. on July 31 and started questioning him on the Patra chawl scam case. ED had summoned Raut on June 28 in connection with the case. However, citing the requirement to attend the monsoon session of the Parliament, Raut refused to join the investigation. He later presented himself for the probe.

As per sources quoted by ANI, ED wants to grill Shiv Sena leader Raut in the case of DHFL-Yes Bank case too, as they think it is connected to the Patra chawl land scam case.

What is the Patra chawl land scame case

The case pertains to the irregularities in the Patra chawl redevelopment project in Mumbai's Goregaon, which was awarded to Guru Ashish Constructions (GACL), in which Sanjay Raut's close friend and associate Pravin Raut was one of the directors.

The chawl in Siddharth Nagar, popularly known as Patra chawl, had 672 houses spread across 47 acres. In 2008, Maharashtra Housing and Area Development Authority (MHADA) gave a redevelopment contract to Guru Ashish Constructions and thereby, a three way agreement was signed between the residents of the society, GACL and MHADA.

Following the agreement, GACL was given the redevelopment work of the 672 flats and also to resell the rest of the area to private developers. However, Pravin Raut along with the other developers allegedly sold the private space to nine developers in return for Rs 901.79 crore without redeveloping the designated area and also the MHADA portion. Subsequently, a fresh project was also launched - 'Meadows' and in all, the total proceeds of the illegal activities amounted to Rs 1039.79 crore alleged ED.

READ | BJP reacts to ED Raids At Sanjay Raut's Home; 'Will be held accountable for wrongdoings'

ED claimed Sanjay Raut's friend Pravin Raut received Rs 100 crore as a part of the proceeds and "diverted" it to various accounts of “his close associates, family members, his business entities”, including the family of Sanjay Raut.

The allegations also include diversion of Rs 83 lakh to Sanjay Raut's wife Varsha Raut, who used the same to buy a flat in Dadar. Moreover, eight flats were bought in the name of Varsha Raut and Swapna Patkar in Alibaugh, ED alleged.