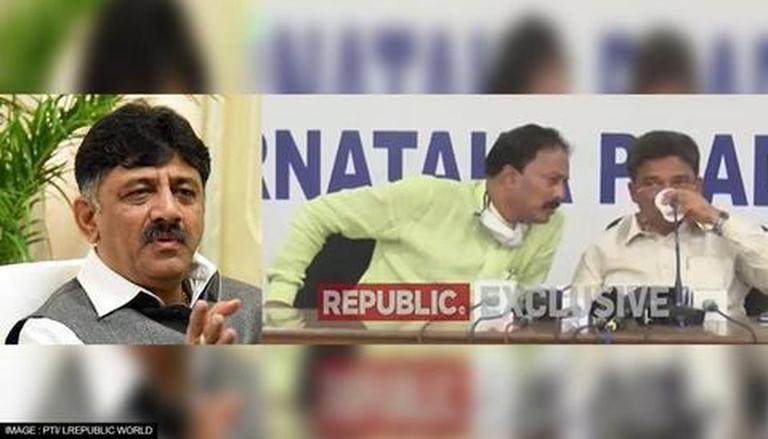 
In a major embarrassment to Karnataka Congress, the party’s former MP and media coordinator were caught on camera raising serious corruption allegations against KPCC president DK Shivakumar. Following the controversy, Congress has suspended media coordinator Saleem and issued a show-cause notice to former MP VS Ugrappa on the matter.

In the sensational video accessed by Republic TV, the duo was captured having a private conversation on the dais where the microphones were placed and cameras were on.

In the video which went viral, Saleem is seen whispering into the ear of Ugrappa, "It was 6-8% before. But after DK Shivakumar came, he made it 12%. It's all DK adjustment... If dug up deeper, it will reach him (Shivakumar). You don't know sir, his aide has made around 50-100 crore. Imagine if Mulgund has this, then how much DK has."

Saleem also compared senior Congress leader Siddaramaiah to Shivakumar saying that while the former was 'powerful', the latter acted like a 'drunkard.' Ugrappa was heard saying that the party has failed to bounce back under Shivakumar's leadership.

After the video went viral, on Wednesday, the KPCC disciplinary committee of the party suspended Saleem for six years and sought a response from Ugrappa.

Reacting to the embarrassing video, Shivakumar said, "The statements which were made were neither connected to the party nor me. Everyone should be accountable and disciplined. My disciplinary committee has expelled Saleem and notice has been issued (to Ugrappa)."

Turning to tables onto the BJP he said, "When things are going in the right way, some people without accountability do such things. Theres' no issue like corruption (in the party). Congress is against it. The BJP is born on corruption."

After being pulled up by the party leadership, Ugrappa took a u-turn saying that he has known Shivakumar for 3 to 4 decades and he is a 'committed politician working towards the betterment of Karnataka.'

Home Minister Araga Jnanendra hit out at the former MP saying that if Ugrappa has concerns to make a corruption-free society, let him file a complaint and the state police will probe the allegations leveled.