In a shocking video that has surfaced on Monday, Union Finance Minister (MoS) Anurag Thakur was seen chanting inflammatory slogans in a BJP Delhi election rally

In a shocking video that has surfaced on Monday, Union Finance Minister (MoS) Anurag Thakur was seen chanting inflammatory slogans in a BJP election rally in Delhi. The video shows the Union Minister shouting 'Desh ke gaddaron ko, goli maron salon ko' (Shoot all traitors of the country) while campaigning for the BJP candidate for Rithala Assembly constituency - Manish Chaudhari. Incidentally, the Union Minister is part of the Finance team headed by Nirmala Sitharaman which will present the Union Budget on February 1.

Maha: Anurag Thakur hits out at Sonia, Rahul over CAA

Earlier on December 20, BJP leader Kapil Mishra had led a pro-CAA rally in Delhi where he had raised the same slogan. After videos surfaced showing Mishra shouting 'Desh ke gaddaron ko, goli maron salon ko', BJP distanced itself from the incident. Mishra is already been slapped with a 48-hour campaigning ban after he compared the Delhi elections to India vs Pakistan in a tweet.

Stirring pre-poll controversy, Mishra tweeted that the elections on February 8 were a poll fight between India Vs Pakistan - equating BJP to India and its opponents to Pakistan. When asked to comment on his tweet, he stood by his comments claiming that there are 'mini Pakistans' in Delhi. Fuelling more controversy, he added that  India will stand against these mini Pakistans and every problem will be solved on February 8 - the day Delhi goes to polls. Mishra unabashedly defended his tweet claiming that he was unafraid of speaking the truth. 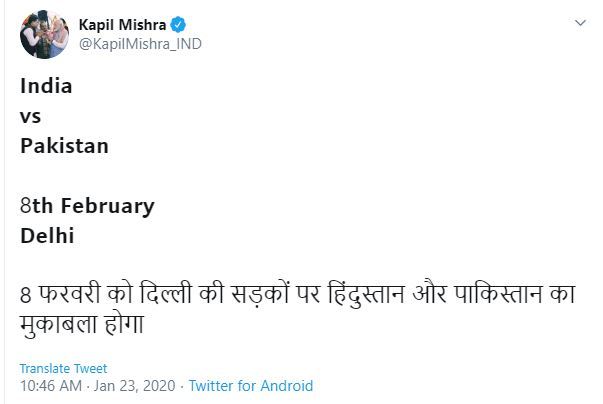 Delhi will go to polls in a single-phase on February 8 and the counting of votes will take place on February 11. The last day of filing nominations for the candidates is on January 21 and the last day to withdraw nominations is January 24. The BJP and Congress are yet to name their Chief Ministerial faces. The ruling AAP is contesting the election with Kejriwal leading them.