As CM Mamata Banerjee-led Trinamool Congress (TMC) swept the 2021 West Bengal Assembly Elections, Senthil Thondaman on behalf of Sri Lanka and Ceylon Workers Congress congratulated the TMC supremo on being elected as the Chief Minister of the state. In a letter addressed to Mamata Banerjee, Senthil Thondaman said that Trinamool Congress' victory speaks in favour of firm confidence and strong support of the people of West Bengal to her and her goal & wise policy.

The letter written by the Ceylon Worker Congress worker read, "The people of West Bengal consecutively elected your party third term strongly believing that under your leadership West Bengal will achieve new accomplishments in its economic and social developments." 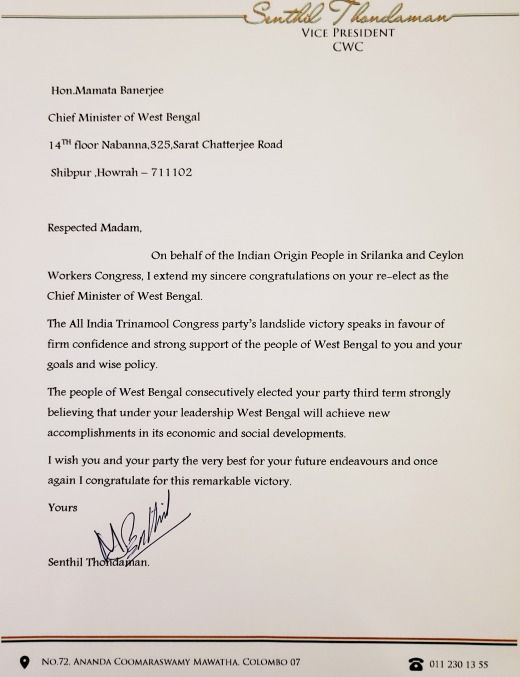 Although Mamata Banerjee lost the high-intensity Nandigram battle, the Trinamool Congress (TMC) won 160 seats and is leading in another 52. Meanwhile, BJP won 49 seats and leads additionally in 29. Accepting its defeat, the BJP said it has reached the milestone of becoming the opposition party in Bengal. “We got the responsibility of becoming the opposition party in the state and we will do everything to serve the people and help Mamata Didi to fight COVID-19 and all other work required to serve the public,” the BJP said in a press conference on the result day.

Bengal witnessed a vigorous contest between the ruling Trinamool and BJP across eight phases held from March to April. The election witnessed incidents of political violence, blame game and mudslinging in the run-up to the election which continued even during the results day.