Gearing up for the Tamil Nadu Assembly polls, DMK president MK Stalin has released his 'vision document' for the next 10 years in Tiruchirappalli 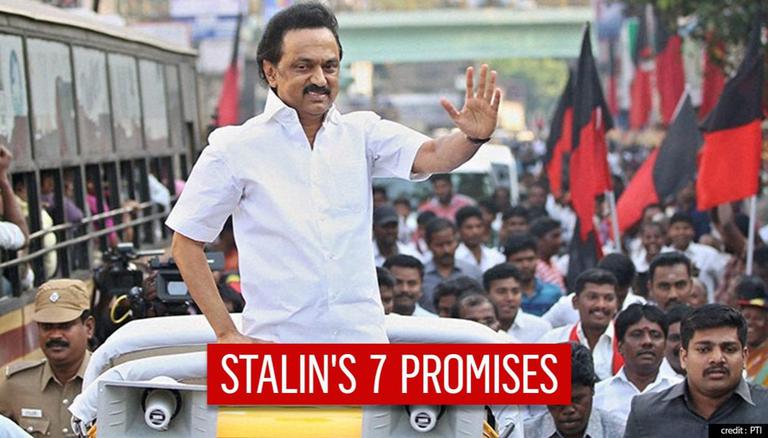 Gearing up for the Tamil Nadu Assembly polls, DMK president MK Stalin on Sunday released his 'vision document' for the next 10 years at a public meeting in Tiruchirappalli.

Addressing a larger gathering of supporters, MK Stalin vowed to expand the state's economy above 35 lakh crore with the implementation of the 10-year plan. He claimed that the plan will create 10 lakh new jobs each year, cut the unemployment percentage in half and increase per capita income to Rs 4 lakh per year. He added that it would lift one crore, people, out of poverty in the next decade.

DMK's first goal is to attain double-digit economic growth for the state, said Stalin, as he invoked the vision of late DMK patriarch M Karunanidhi, party founder CN Annadurai and icons such as 'Periyar' EV Ramasamy and Jeeva.

1. DMK's 'vision document' promises a monthly instalment of Rs 1,000 to each homemaker in Tamil Nadu if voted to power. All the families that are given essential commodities from Public Distribution Outlets would be benefited from his, Stalin said. A similar scheme was also proposed by Makkal Needhi Maiam (MNM) chief and actor Kamal Haasan.

2. Stalin asserted that each rural home will have running tap water in the next 10 years in Tiruchirappalli.

4. The Opposition party has also committed to building 9.75 lakh concrete houses, aiming to bring down the state's population of slum dwellers from 16.6% to 5 percent.

5. Stalin vowed to double the educational scholarship for Scheduled Castes and Scheduled Tribes and Other Backward Communities if voted to power.

6. He promised to completely abolish manual scavenging in the state with the help of technology, Stalin said. It is pertinent to note that Tamil Nadu accounts for a large number of manual scavenging-related deaths in India.

7. MK Stalin also said that the current 10 lakh hectares of farmland that produce two-crops would be increased twofold to 20 lakh hectares in the next 10 years.

Tamil Nadu will hold polls in a single phase on April 6 to elect a total of 234 members to the Legislative Assembly. The counting of votes for all these polls will take place on May 2.