External Affairs Minister S Jaishankar on Tuesday made a statement on India's presidency of G20 at the party's national executive meeting as he asserted that the country's image has transformed globally in the last nine years of the Narendra Modi-led government. 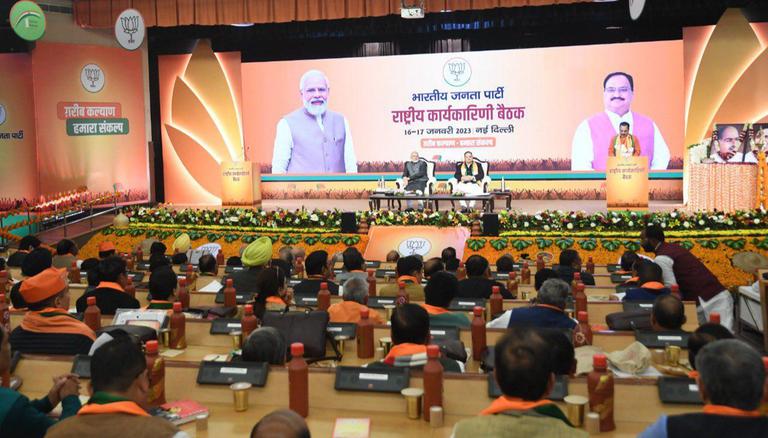 
External Affairs Minister S Jaishankar on Tuesday made a statement on India's presidency of G20 at the party's national executive meeting as he asserted that the country's image has transformed globally in the last nine years of the Narendra Modi-led government.

During the convention, a statement on "garib kalyan" (ruling party's welfare policies) at the Centre and in states where it is in power was also made, with BJP Parliamentary Board member Sudha Yadav dismissing Congress leader Rahul Gandhi's criticism about concentration of wealth.

Gandhi keeps raising the same issue without looking at figures about crores of people benefitting from the government's welfare policies, she said, accusing him of making false claims.

The attention given to the SC, ST, poor and backwards in the last nine years is unprecedented, she said.

Briefing reporters on the statement made by Jaishankar in the closed-door meeting, BJP vice president Baijayant Jay Panda quoted the minister, saying the world's view of India has changed in the last nine years.

When the Covid pandemic broke, there were concerns that India will be one country which may not manage it but now the G20 and the world in general is "full of admiration" as it not only dealt with the crisis but also reached out with help to other countries, he said.

India used to depend on other countries during earlier crisis but it not only met the challenges of the pandemic on its own but also helped others, Jaishankar said. Panda said BJP workers will in their individual capacity work to connect the society as the country hosts over 200 G20-related events over 50 places. It is an opportunity to connect the society and showcase India's progress and its rich heritage as delegates from not only the elite bloc of 20 leading economies but also many multilateral bodies like IMF will visit the country, he added.

India has also succeeded in keeping its economy strong, he said.

The statement on the welfare policies was made by Samrat Chaudhary, an OBC leader who heads the party's legislators in the Bihar legislative council.

Speaking to reporters on its content, Yadav said Modi had asserted that his government will be dedicated to the poor, deprived and backwards after he assumed office in 2014 and that he has worked to ensure it since then through a host of welfare policies.

"It was the Modi government under which the direct benefit transfer was used to help crores of the people receive money in their bank accounts even during the pandemic. Right from 'Har Ghar Jal', 'Housing for All' and the farmers' welfare policies, the Modi government has touched every segment of the society," she said.

From providing housing, electricity and water to the poor, it has launched numerous schemes to help different segments of the society. BJP governments in different states have also worked on these lines, she said.