The BJP on Friday asserted that the ongoing tussle in the Rashtriya Janata Dal Party (RJD) is the result of a tussle for 'power and position' in the party. 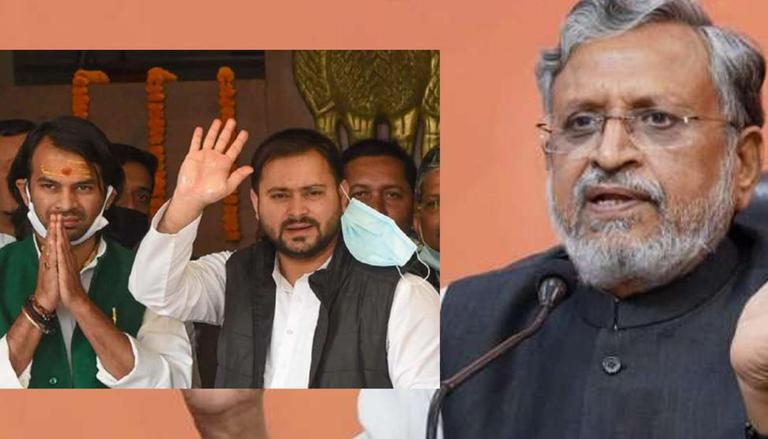 
Sushil Kumar Modi of the Bharatiya Janata Party (BJP) on Friday asserted that the ongoing tussle in the Rashtriya Janata Dal Party (RJD) is the result of a tussle for 'power and position' in the party. Taking to his official Twitter handle, Rajya Sabha MP Sushil Kumar Modi asserted that Tej Pratap was actually upset with the fact that his younger brother Tejashwi was getting a better position and gaining more power in the regional party. Modi also insisted that Tej Pratap was just venting all his grievances in relation to the same by targetting the party's state chief Jagadanand Singh.

RJD's Bihar chief Jagadanand Singh nominated Gagan Kumar as president of Chhatra RJD, replacing Aakash Yadav, a close aide of Tej Pratap. This development, which as per sources, took place with the consent of Tejashwi, has left Tej Pratap miffed, and he has been protesting against the same.

'Someone else is the real target': BJP

Taking to Twitter, Sushil Kumar Modi wrote,"The attack on RJD chief Jagadanand Singh by the elder son Tej Pratap Yadav is the result of the ongoing war for power and position in the party. The Big brother,  miffed at the young brother getting more power in the party, is unnecessarily attacking the aged Jagadanand Singh. Someone else, however, is the actual target."

READ | Tej Pratap denies rumours of tussle with Tejashwi; calls him his 'Arjun' & 'next Bihar CM'

The statement of Sushil Kumar Modi comes right after Tej Pratap and Tejashwi's meeting, which the former left midway, claiming that they were interrupted by party leader Sanjay Yadav.

'Who is he to speak between two brothers?', a fuming Tej Pratap asked, after the meeting, on which he had very hopes."Till now, my Arjun (Tejashwi) has stayed with me, supported me, and I am hopeful, even this time he will support me," Tej Pratap had said before entering the meeting.

War of words between Tej Pratap and Jagadanand Sing

Earlier in the day, Jagadanand Singh, while talking to the media earlier, had said that he was 'unaware' that the elder son of Lalu Prasad Yadav, and Rabri Devi were upset with him. Pointing out that Tej Pratap might be having a misunderstanding, the RJD Bihar chief added,

"He wants to make a small thing into a big matter."

"Who is Tej Pratap? I am not accountable to Tej Pratap. I am accountable to Lalu Prasad, he is my president. Among 75 party members, he (Tej Pratap) is one of them. Does he have any other post at the party?" RJD Bihar chief Jagadanand Singh added.

Responding to Jagadanand Singh, Tej Pratap had said he was not concerned about the public comments lashed out at him.