BJP's Suvendu Adhikari stated that Kolkata has always been the corridor for Bangladeshi intruders, thus Centre's move to extend BSF's jurisdiction is justified. 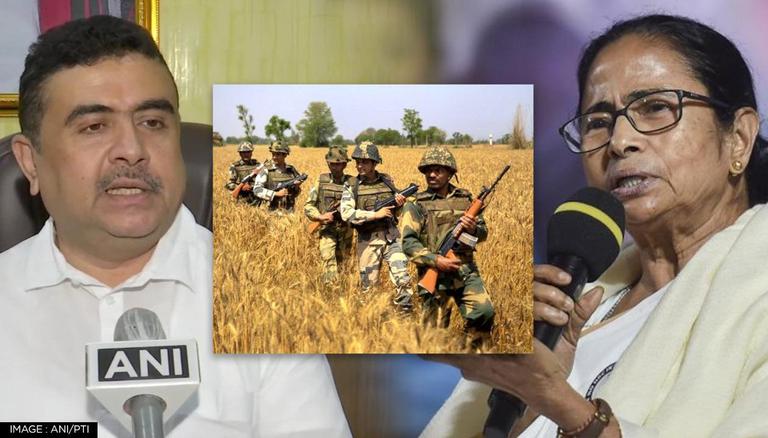 
Stating that Kolkata has always been the corridor for the 'Bangladeshi intruders', BJP leader and Leader of Opposition in West Bengal Assembly Suvendu Adhikari on Tuesday justified Centre's move to extend the BSF's jurisdiction from 15 km from the international border to 50 km. He slammed Chief Minister Mamata Banerjee for creating constant ruckus and demanding withdrawal of the government's decision. Citing National Security, Adhikari also added that these intruders are the reason why the National Register of Citizens (NRC), National Population Register (NPR) and Citizenship Amendment Act (CAA) are needed.

"Kolkata has always been the corridor for the Bangladeshi intruders. The main accused of Bangabandhu Sheikh Mujibur Rahman was Majid, he was in Park Circus, Kolkata, for 15 years. NIA arrested him. Bengal Police is not doing any work that's why UP Police came and caught 20 Bangladeshi infiltrators. So, the Centre's decision over the extension of BSF jurisdiction from 15 km from the international border to 50 km is good for the national security," Adhikari said.

"The border post monitoring should be increased especially near the coastal areas. This is in the interest of the people. That's why NRC, NPR, CAA are needed. Therefore population control is needed, otherwise, our country will not exist," the BJP leader told ANI.

On October 11, the Home Ministry issued a notification amending a July 2014 Act enabling provision for the BSF personnel and officers while they operate in the border areas. The BJP-led central government had amended the BSF Act to authorise the Force to undertake search, seizure, and arrest within a larger 50 km stretch, instead of 15 km, from the international border in Punjab, West Bengal, and Assam. After the notification was issued West Bengal and Punjab governments expressed their apprehension that such a move encroaches upon the powers of the state government.

TMC Supremo Mamata Banerjee had earlier stated that the decision was taken without the consent of the state government and the Centre's move was an "infringement" on the rights of the state and an "attack" on the federal structure of the country. Earlier this week, Mamata Banerjee even met Prime Minister Narendra Modi asking him to revoke the decision.