The war of words between BJP and TMC continued unabated on Monday as Suvendu Adhikari hit back at West Bengal CM Mamata Banerjee over the Lakhimpur violence. 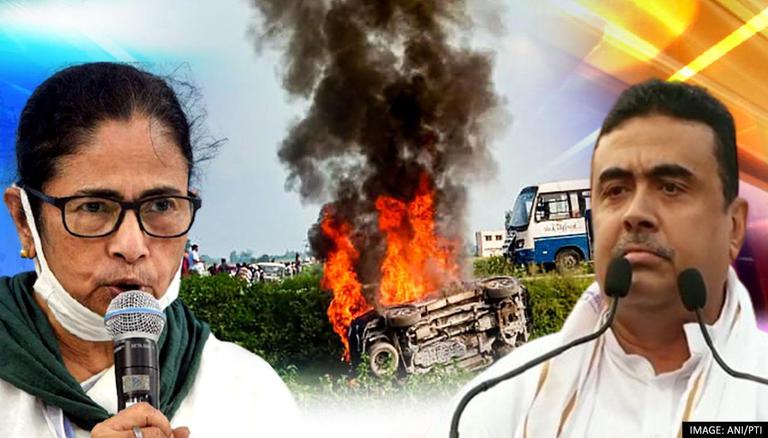 
The war of words between BJP and TMC continued unabated on Monday as Suvendu Adhikari hit back at West Bengal CM Mamata Banerjee over the Lakhimpur violence. The TMC supremo had slammed the imposition of Section 144 in the Lakhimpur-Kheri district citing that the Uttar Pradesh government didn't want the "truth" to come out. Moreover, she opined, "Killing Raj is going on, instead of Ram Rajya as promised by them (BJP)".

Speaking to the media, Leader of Opposition and Nandigram MLA Suvendu Adhikari remarked, "Mamata Banerjee is an opportunist. She made Bengal a killing hub. 55 BJP workers were killed in post-poll violence in West Bengal. The one who has made Bengal a killing hub should not question Uttar Pradesh's Chief Minister Yogi Adityanath who is working towards Ram Rajya' in the state."

Notably, the Calcutta High Court ordered a CBI probe in post-poll violence cases pertaining to murder and crimes against women on August 19. It also entrusted all other cases referred by the NHRC to an SIT comprising IPS officers Suman Bala Sahoo, Soumen Mitra and Ranbir Kumar. So far, the CBI has registered 40 FIRs whereas the charge sheet has been filed in 7 cases.

West Bengal | The one who has made Bengal killings hub should not question Uttar Pradesh's CM Yogi Adityanath, who's making a 'Ram Rajya': West Bengal LoP Suvendu Adhikari, on Chief Minister Mamata Banerjee 'killing rajya' remark over Lakhimpur violence incident in UP pic.twitter.com/9Cn0jtnpJ6

What happened at Lakhimpur-Kheri?

Farmers were protesting against the three farm laws ahead of an event in Uttar Pradesh's Lakhimpur Kheri district on October 3 where UP Deputy CM Keshav Prasad Maurya was invited as the Chief Guest. Since the morning, the protesters had gathered with black flags at the helipad in the Maharaja Agrasen Ground in Tikonia where Maurya was scheduled to land. Thereafter, violence erupted between farmers and BJP workers leaving 8 persons including 4 farmers dead and many others injured.

As per the Samyukta Kisan Morcha, Union MoS Home Ajay Mishra's son Ashish Mishra came with three vehicles around the time the farmers were dispersing from their protest. It claimed, "He mowed down farmers and towards the end also attacked SKM leader Tajinder Singh Virk directly, by trying to run a vehicle over him. There were also shots fired, and one of the deaths was by this shooting by Ashish Mishra and his team". On the other hand, the Union MoS Home disputed that his son was at the site of the crime and blamed the protesters instead.

READ | 'A day of sadness': Amarinder Singh express grief over the plight of farmers in Lakhimpur

According to Ajay Mishra, three BJP workers and a driver were killed by the protesters when their vehicle turned turtle following stone-pelting by farmers. Speaking exclusively to Republic TV, Ashish Mishra claimed that he was present in the annual 'Dangal' event organised in the Banbirpur village when the incident took place. Later on Monday, the farmers allowed the police to take the victims' bodies for post-mortem after the Yogi Adityanath-led government agreed to their demands.

For instance, it announced a compensation of Rs.45 lakh and a government job to the families of the deceased farmers besides giving Rs.10 lakh to the injured. Addressing a press briefing alongside BKU spokesperson Rakesh Tikait, DG (Law & Order) Prashant Kumar added that an FIR will be registered on the complaint of farmers and a retired High Court judge will probe the violence. Meanwhile, Congress general secretary Priyanka Gandhi Vadra continues to be detained at the PAC guest house in Sitapur.