The MK Stalin-led government in TN had earlier told the court that it will launch inquiry into corruption charges against AIADMK former minister SP Velumani. 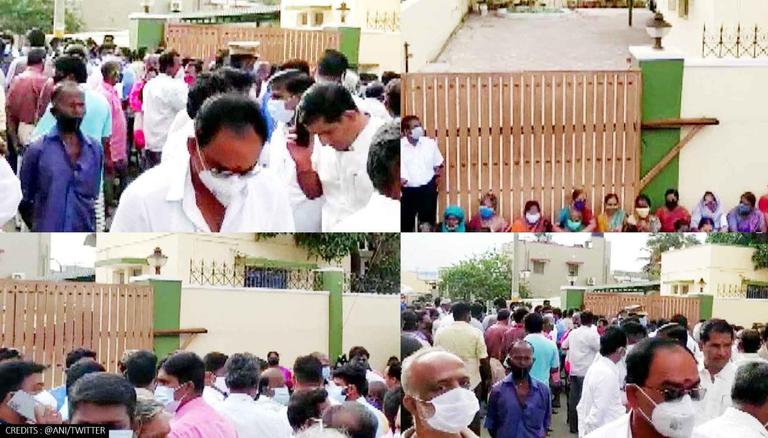 
The Directorate of Vigilance and Anti-Corruption (DVAC) on Tuesday conducted raids at over 52 locations including the residence of All India Anna Dravida Munnetra Kazhagam (AIADMK) MLA SP Velumani. A large number of party workers and supporters gathered outside his residence in Kuniyamuthur. Raids were conducted in connection with a corruption case registered by the DVAC, which has reportedly registered cases against 17 persons including Velumani and his brother Anbarasan.

In July, the DVAC had launched simultaneous raids at 21 locations across Tamil Nadu's Chennai and Karur in connection with former AIADMK minister Vijaybhaskar's properties.

Tamil Nadu | Directorate of Vigilance and Anti-Corruption (DVAC) conducts raids at the residence of AIADMK MLA SP Velumani; large number of party workers and supporters gather outside his residence in Kuniyamuthur pic.twitter.com/bbnNfCDgQK

The MK Stalin-led government had earlier told the Madras High Court that it will start a thorough inquiry into corruption charges against AIADMK former minister SP Velumani if required. The state government had presented the Comptroller and Auditor General (CAG) report before the first bench of chief justice Sanjib Banerjee and Justice Senthilkumar Ramamoorthy and pointed out that the former minister during his tenure used to give contracts to his close ones. The report also highlighted that there were many irregularities in the contract book of the Chennai Municipal Corporation.  A Chennai-based non-governmental organisation named Arappor Iyakkam had also filed a PIL against Velumani and Chennai Corporation.

The Advocate General (AG) R Shunmugasundaram pointed out that the CAG report presented by the state government matched with the findings of Arappor Iyakkam, which highlighted the corruption involved between the Chennai civic body officials and Velumani. The court said that there would be a strict investigation into the matter and a First Information Report (FIR) would be filed by the state government if it is required.

The July raids were related to the disproportionate assets case. The teams reached 20 locations of Karror and at one spot in Chennai. Vijayabhaskar was the transport minister in the year 2016. He was defeated in the recent assembly election in Karur by Senthil Balaji, a former AIADMK minister who shifted loyalty to DMK. Additional charges on Balaji, a DMK minister, include involvement in a job scam in the transport department when he was serving as a minister from 2011 to 2015 in former chief minister Jayalalithaa's cabinet. This is not the first time the minister's residence is getting searched as IT officials had raided Vijayabhaskar's house  in 2017 over alleged obstructions.

In 2018, the AIADMK leader had faced an additional probe by the Central Bureau of Investigation (CBI), which was left  pending for a very long time due to lack of solid prima facie evidence and is rumoured to be false information.