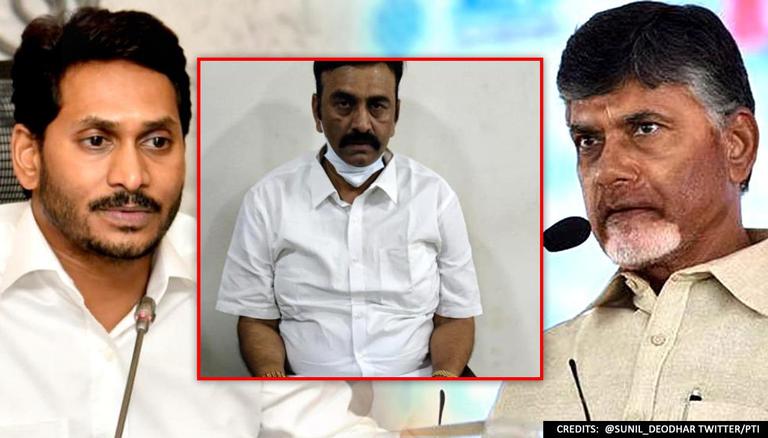 
A day after the arrest of Narasapuram MP Raghurama Krishna Raju, TDP supremo Chandrababu Naidu has demanded a 'full-fledged inquiry' into the alleged physical torture of the rebel YSRCP leader. The former Andhra Pradesh Chief Minister has claimed that senior officials are resorting to 'third-degree' methods against Raju, who remains in CID custody. The Narasapuram MP was arrested by CID late on Friday night, accusing him of causing communal tensions by 'attacking various government dignitaries.'

In a statement issued by Chandrababu Naidu on Saturday, the former Andhra CM demanded a high-level probe into the alleged 'third-degree' methods used against Raghurama Raju and sought action against the top CID office concerned. In a strong-worded attack on the ruling YSRCP administration led by CM Jagan Mohan Reddy, Naidu said that if anything were to happen to the Narasapuram MP in custody, the state government would be held accountable. The TDP chief also said that such incidents of the claimed physical torture were only exposing how 'faction-ridden system would perpetrate injustice on the people of all sections'.

"If the police physically attacked a person of MP status, then it would be unthinkable the plight of a common average citizen in the State. A detailed probe should be held into the third degree methods used against the MP in the CID police station," Chandrababu Naidu said.

.@raghuraju_mp was arrested on a foisted case, tortured right in the AP CID office in a barbaric manner. His crime? To question the criminal CM on his anti-people ways. Broad daylight violation of fundamental rights and mockery of democracy. (1/2)#WeAreWithRRR

Andhra Pradesh's BJP in-charge, Sunil Deodhar, also condemned the 'torture' of MP Raghurama Krishna Raju. Taking to Twitter, the BJP leader hit out at the ruling state government and questioned the alleged physical torture was 'revenge' for raising voice against the Chief Minister and 'conversion mafias'.

I condemn the torture of MP #RaghuRamaKrishnamRaju by AP Police.
Till now, people of AP thought @YSRCParty is a Rowdy-Party. But now, Police Dept also seems to have become its another Rowdy outfit.

Is this the revenge for raising voice against Conversion Mafias, CM @ysjagan ? pic.twitter.com/fXy05bL1UA

Raghu Ramakrishna Raju was arrested late on Friday night after a non-bailable case was filed against him. The CID has informed, "In preliminary enquiry, it was found that through his speeches, he was indulging in systematic, schematic effort to cause tensions among communities and by attacking various government dignitaries in a way that will cause loss of faith in government which they represent."

Additional Director General PV Sunil Kumar is said to have interrogated the Member of Parliament from the Narsarapuram Lok Sabha constituency. The MP was given medical assistance and will most likely be taken to the Government General Hospital in Guntur for medical tests on Saturday morning, authorities informed.

According to reports, a case has been filed against the MP under Section 124-A (sedition) of the Indian Penal Code (IPC) for allegedly making derogatory remarks about the Jagan Mohan Reddy government, causing damage to its prestige and inciting hatred among the people. The MP has also been charged under Sections 153 (b) (making remarks that cause communal disharmony or undermine national integration) and Section 505 (making statements that cause public mischief).