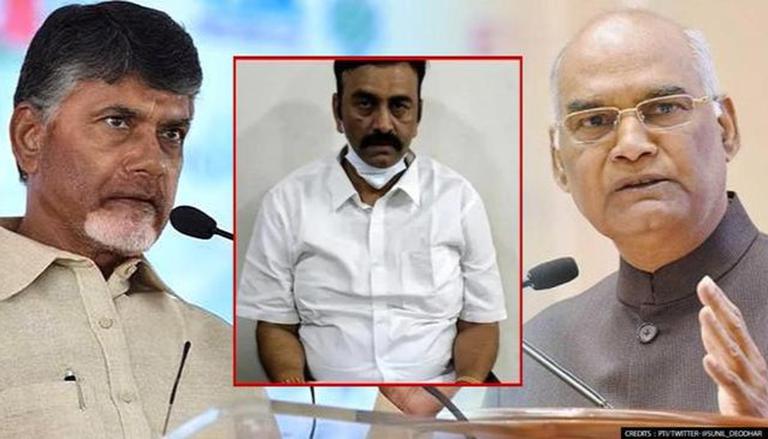 
Telugu Desam  Party (TDP) supremo Chandrababu Naidu sought the intervention of President Ram Nath Kovind over the alleged custodial torture of YSRCP Rebel MP Raghurama Krishna Raju by the Andhra Pradesh CID. Earlier on Sunday, Naidu had sought the intervention of the Andhra Pradesh Governor Biswabhushan Harichandan in the matter citing 'grave danger' to the Narsapuram MP's life from the ruling YSRCP. In his letter to President Kovind, TDP's Chandrababu Naidu alleged that the YSRCP rebel MP was arrested on a baseless and frivolous charge of sedition for speaking out against CM Jagan Mohan Reddy and that it wasn't an isolated incident, claiming that the state govt had allegedly resorted to such tactics against voices of dissent.

Chandrababu Naidu went on to claim that the rebel YSRCP MP's life was under threat from the YSRCP-led Andhra Pradesh govt and noted that the Centre had provided Y category security to Raghurama Krishna Raju based on threat perception in 2020. Naidu claimed that 'never in history' had an MP been treated in such a manner for voicing dissent against the ruling party. The TDP supremo further claimed that the state's police force was being misused by the govt to suppress opposition.

In a letter to Governor Harichandan, the former Andhra Pradesh chief minister claimed that Raju has been 'illegally arrested' and was 'brutally injured' by five masked men in the custodial violence that took place on the day of his arrest. Naidu also said that state police did not produce the Narsapuram MP for medical examination, as ordered by the High Court, and instead shifted him to Guntur jail. The former CM also mentioned that the Narsapuram MP's wife, Ramadevi, is concerned that he would be attacked in custody and highlighted that Raju had been provided 'Y category' security by the Indian government in 2020 based on the perceived threat to his life.

"As per the court order, the police were supposed to get the MP examined at Government General Hospital, Guntur and then at the Ramesh hospital, Guntur. This should be done in the presence of his “Y” category security given by the Central Government. However, the police did not produce Mr Raju for medical examination at Ramesh hospital and they shifted him to Guntur Sub Jail. They shifted the MP through the backdoor at the GGH, Guntur, without informing his family members and by evading the media," Chandrababu Naidu wrote in his letter to the Andhra Pradesh Governor.

Raghu Ramakrishna Raju was arrested late on Friday night after a non-bailable case was filed against him. The CID has informed, "In preliminary enquiry, it was found that through his speeches, he was indulging in systematic, schematic effort to cause tensions among communities and by attacking various government dignitaries in a way that will cause loss of faith in government which they represent." Additional Director General PV Sunil Kumar is said to have interrogated the Member of Parliament from the Narsarapuram Lok Sabha constituency. The MP was given medical assistance and will most likely be taken to the Government General Hospital in Guntur for medical tests on Saturday morning, authorities informed.

According to reports, a case has been filed against the MP under Section 124-A (sedition) of the Indian Penal Code (IPC) for allegedly making derogatory remarks about the Jagan Mohan Reddy government, causing damage to its prestige and inciting hatred among the people. The MP has also been charged under Sections 153 (b) (making remarks that cause communal disharmony or undermine national integration) and Section 505 (making statements that cause public mischief).