"Someone is eyeing post of National President of RJD ( hinting at Tejashwi )," said Tej Pratap while addressing a training program of his new-formed outfit. 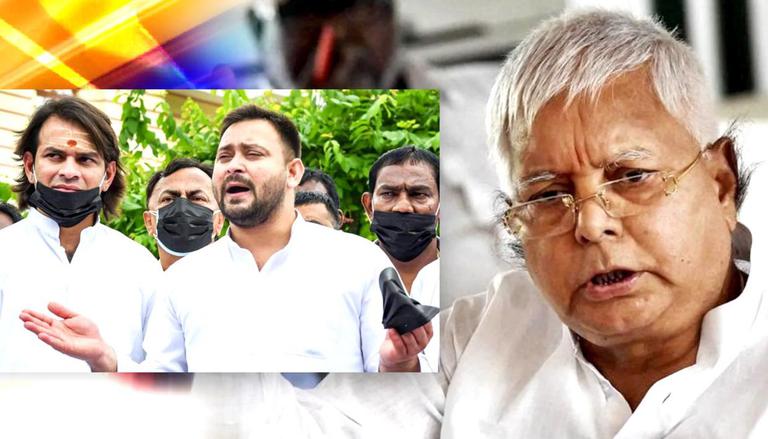 
Lalu Yadav, the National President of RJD, is battling multiple diseases and has been confined to Delhi ever since he came out of jail. However, the fight for political hegemony between Tejashwi Yadav and Tej Pratap doesn't seem to stop.

On Saturday afternoon, Tej Pratap Yadav, while addressing a training program of his newly formed outfit "Chatra Jan shakti" Parishad in Patna made sensational allegations that his father Lalu Yadav has been made captive in Delhi and that he is not being allowed to return to Patna. He also indirectly attacked Tejashwi Yadav, claiming that he is trying to replace his father as National President of RJD.

In the speech, the eldest son of Lalu Yadav said, "Someone is eying the post of National President of RJD (hinting at Tejashwi Yadav). It's been long that he has come out of jail, but he has been made captive in Delhi. He is not being allowed to come to Patna."

"I spoke to my father and asked him to stay with me in Patna and look after the organization of the party. When my father used to live in Patna, the main gate of our residence used to be open and he used to meet the common people in the outhouse."

"Four to five people are running the show at the party and what they have done is put a barricade outside the residence, so that the common people are away. This way the party will break. I don't want to put any pressure on my father, as he is not keeping well ."

Thereafter, Tej Pratap tried to meet Tejashwi multiple times but in vain. In fact, Tejashwi suggested Tej Pratap maintained discipline within the party. On the occasion of Raksha Bandhan in August, the brothers were not seen together in the family photographs.

Lalu Yadav had appointed Tejashwi Yadav as his political heir in 2015 when he was made the Deputy CM under Nitish Kumar. In turn, over a period of six years, Tejashwi has established himself as the leader of the RJD. However, Tej Pratap wants control over the party if Tejashwi emerges as a Chief Ministerial candidate.