Prime Minister Narendra Modi, on Friday, announced that the Centre has decided to repeal three farm laws, passed in 2020, in the upcoming session of Parliament. 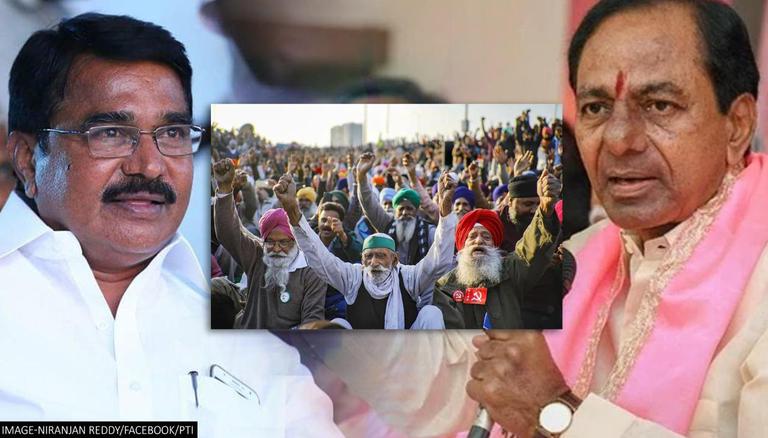 
Lauding Telangana Chief Minister K Chandrasekhar Rao for his efforts towards the repealing of three farm laws, state Agriculture Minister Niranjan Reddy claimed that the 'mahadharna' staged by Chief Minister Rao pushed the Centre for an early repeal of the three farm laws. His statement came shortly after Prime Minister Narendra Modi announced the Centre's decision to repeal the three legislations that led to nationwide protests since being introduced in September, last year.

While speaking to news agency ANI on Friday, Reddy praised the Telangana chief minister and said, "He is a man with virtues who can articulate in Hindi and English and make remarkable registration in minds of farmers across the country. PM Modi knows the capacities, capabilities, and articulatory skills of KCR, and therefore the 'mahadharna' staged by CM yesterday has made the Prime Minister take an early decision."

Welcoming the Centre's decision and lauding the protesting farmers, Reddy called it a "welcoming gesture" and said, "We wholeheartedly welcome the repealing of farm laws."

"The farmers have conducted their agitation and stood against all odds of winter, summer, and rainy seasons. The Prime Minister unconditionally apologised to the farmers of the country. That shows the deep concern of PM. We welcome it", he added.

At the same time, Reddy also demanded to provide ex gratia to the families of farmers who lost their lives during the protests.

Earlier on Thursday, the ruling TRS cabinet led by Chief Minister K Chandrasekhar Rao staged a 'mahadharna' in Hyderabad protesting against the Centre's unwillingness to procure paddy from the state's farmers. Several Cabinet ministers and elected officials gathered at the site to express their solidarity with the farmers and participated in the protest. Along with that, they were also seen demanding the repealing of the three agriculture bills.

Earlier on Friday, Prime Minister Narendra Modi in his address announced that the Centre has decided to repeal the three contentious farm laws in the upcoming Winter session of Parliament. Further apologising to the farmers, PM Modi said that the government was not able to convince them regarding the benefits of the laws and has now decided to repeal them.

(With inputs from ANI, Image: PTI/@NiranjanReddy/Facebook)