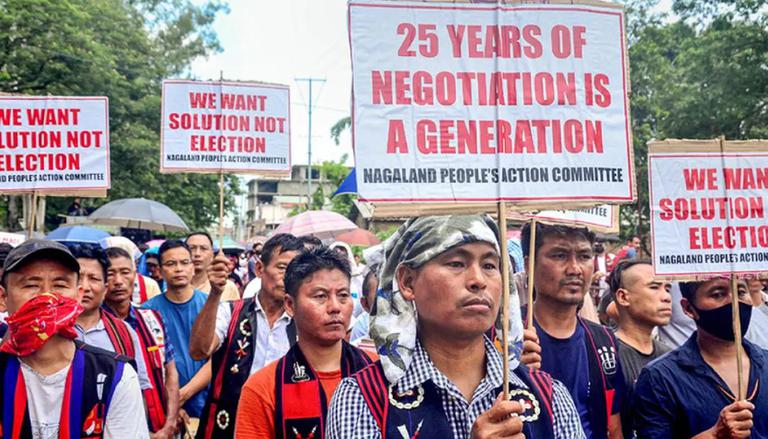 A meeting on the issue held in June at Dimapur under the aegis of the Nagaland Gaon Burah Federation (NGBF) or village chieftains, and participated by civil society organisations, tribal bodies, public leaders and intellectuals, constituted the NPAC to press for an early solution.

The Confederation of Nagaland Chamber of Commerce and Industries in solidarity with the public rally had called for two-hour shutter down across the state from 10 am to 12 pm.

While there was a mixed response over the call for shutter down in other districts of the state, including state capital Kohima, the commercial hub of Dimapur witnessed a massive turn out at the rally in the Super Market Complex where various leaders expressed their demand for an early solution.

Armed with banners and placards saying "No Peace, No Progress" and "No political will, no political solution", the participants sought a solution to the crisis.

Addressing the gathering, NPAC convenor Theja Therieh said that when 25 years of negotiation could not bring any solution, why not just wind it up and leave it to the people.

The motive behind organising the rally was to express public sentiments and anguish over the unending negotiations that have been dragging on for the last 25 years, he said.

The process has taken a huge toll on the governance, security and safety of the people, he said.

Therieh said that Naga people would like to send a clear message to the Centre that "enough is enough".

Ao Union Dimapur president Meren said, "As stakeholders, we have every right to know what the Government of India is giving to us because the solution does not belong to a single person. The Naga political solution belongs to the Nagas."

Dimapur Naga Council president E Kikon said that an acceptable and peaceful solution to the issue was needed without further delay.

"It is a matter of concern to bring home a successfully negotiated agreement for which we appeal to each and every Nagas to work together for the betterment of the people," said Elizabeth, a member of the Dimapur Naga Women Hoho.

Meanwhile, the rally resolved to submit a public representation for an early Naga political solution to Prime Minister Narendra through Governor Jagdish Mukhi.

The public representation said that in 2018 when the civil societies and all political parties, including the BJP, unequivocally demanded a solution before election, the BJP "breached the trust of the people" and filed nominations with the slogan "Election for Solution".