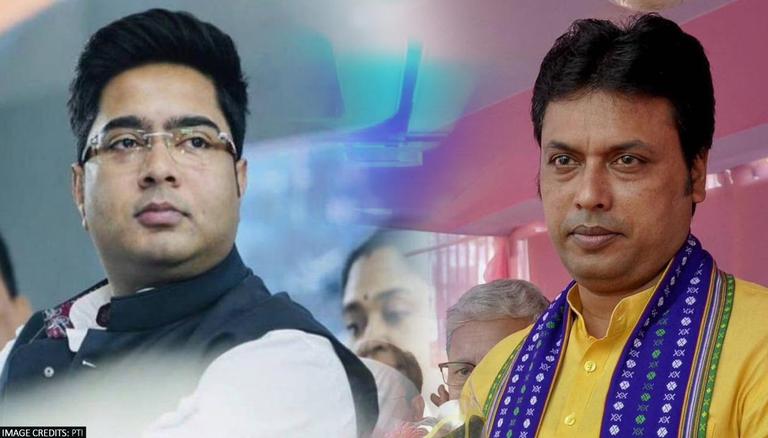 
All India Trinamool Congress (TMC) National General Secretary Abhishek Banerjee on Monday launched a fresh attack on the Bharatiya Janta Party (BJP) in Tripura after his party was denied permission to conduct a political rally.

Tripura police have maintained that the TMC's requested to hold a rally in Agartala was denied as another political party had received prior permission to hold a rally on the same day. Reacting to it, the TMC MP said that Tripura BJP is "scared to death" to let him enter the state. Banerjee shared two letters sent by the Tripura police rejecting the party's request to hold a demonstration on September 15.

.@BJP4India is SCARED TO DEATH and @BjpBiplab is using all his might & resources to prevent me from entering Tripura.

Keep trying but you CANNOT stop me. Your fear of @AITCofficial shows that your days in governance are numbered.

The TMC MP informed citing the letters that the TMC was initially denied permission to hold a rally on September 15 as another political gathering was already scheduled on that date. Additionally, the state authorities added that "it is not possible to permit for holding of rally on September 16 since there will be law and order commitment of the police in view of Vishwakarma Puja which falls on September 17." Vishwakarma Puja is a major festival in the state of Tripura and invites large crowds.

Police has refused permission for the padyatra of @AITCofficial to be led by @abhishekaitc in Agartala on 15th September.

Police claims another political party has taken permission at the same time for the entire city of Agartala. @BjpBiplab is clearly quaking..

Reacting to the letters shared by the general secretary of the party, TMC Youth Wing leader Debangshu Bhattacharya Dev asserted in Bengali, "this is the condition after Abhishek planned to come for one day. If he had planned to come for seven days then heart patients in Tripura would suddenly increase."

Meanwhile, TMC leader Kunal Ghosh wrote on Twitter, "Who is so scared that BJP police also objected on 16/9 after banning the 15/9 Tripura march on ridiculous arguments. Proven, @AITCofficial is the main opponent here. The BJP has a headache with them. It cannot be stopped in this way. The next step will be announced by Trinamool on Tuesday."

Earlier, the TMC had announced that the national general secretary Abhishek Banerjee would lead a padayatra in Tripura's Agartala on September 15 to protest against the “BJP-IPFT government misrule.”