Narendra Singh Tomar said that Congress' Rahul Gandhi has no "experience of the pain of farmers" and his actions are to stay "politically" relevant. 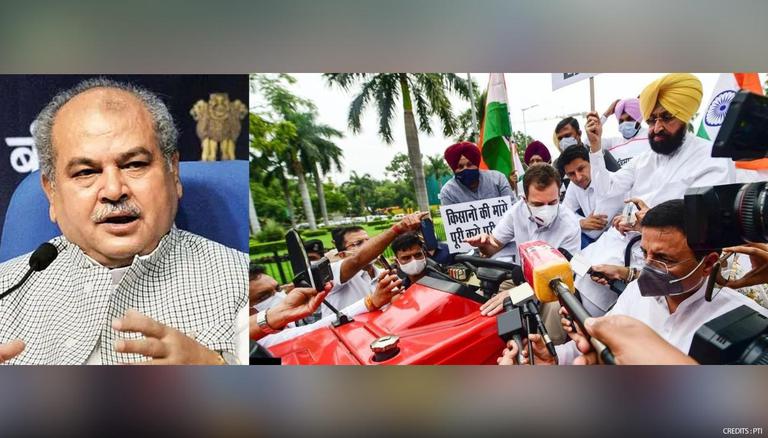 
Union Agriculture Minister Narendra Singh Tomar on Monday targeted Congress leader Rahul Gandhi for his tractor rally in protest against the Centre's three farm laws. The BJP leader said that Gandhi has no "experience of the pain of farmers" and his actions are to stay "politically" relevant.

Asserting that Congress workers themselves make fun of Rahul Gandhi's statements, Tomar told ANI, "He has no experience of the pain of the village, poor, or farmers. He is habituated to lie day after day in his unsuccessful attempt to stay politically relevant."

The Union Minister's remarks come after Gandhi was seen driving a tractor ahead of the House proceedings on Monday. Claiming that the Centre is suppressing the voices of farmers, the Wayanad MP stated that he is bringing farmers' message to Parliament.

Hitting out at BJP, Gandhi said that the government should discuss farm laws in Parliament and exhorted them to repel these "black laws". "As per the government, farmers are very happy and those (protesting farmers) sitting outside are terrorists. But in reality, farmers' rights are being snatched away," the Congress leader said.

READ | Rahul Gandhi drives a tractor to the Parliament in protest against farm laws, watch

Congress leaders detained for violation of Section 144 of CrPC

Soon after, Congress leaders were detained by the Delhi Police for taking out a tractor march in violation of Section 144 of CrPC. Those detained include Congress General Secretary Randeep Surjewala, Youth Congress chief Srinivas BV and other party workers.

READ | 'Farmer died due to head and mouth injury, not of bullet wound on Jan 26': Panel report

After his release, Surjewala, speaking to the media, said that the battle will continue against the agri laws. "They kept me in jail for 7 hours. Keep me in for 70 years, but take back the black (farm) laws," the Congress leader said.

The agitating farmers have been demonstrating against the Central government's three farm laws since November last year, demanding a complete abrogation. The farmers believe that these laws will end the Minimum Support Price (MSP) system and benefit private companies, a claim which the centre has denied. There have been multiple rounds of talks between the government and farmers. However, to no avail.