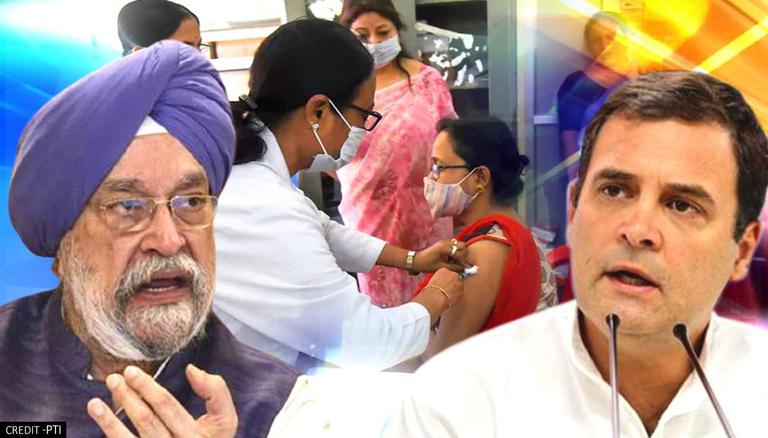 
On Tuesday, Union Minister Hardeep Puri took a jibe at ex-Congress president Rahul Gandhi for his objection to private hospitals charging a fee for COVID-19 vaccines. Gandhi's tweet came in the wake of PM Modi's address to the nation where he announced a partial rollback of the decentralized vaccine procurement policy. As per the new formula applicable from June 21, the Centre will procure 75% of the vaccine stock and distribute it to the states for free whereas 25% will be reserved for the private sector.

According to Puri, the Wayanad MP's grouse was akin to trolling the government's stance in Punjab which is a Congress-ruled state. This was seen as a reference to the Punjab government's recent decision to sell COVAXIN to private hospitals at a premium. Moreover, it is pertinent to note that the COVID-19 inoculation for the 18-44 age group is free only in Punjab government healthcare facilities.

Sh Rahul Gandhi has been going around asking “If vaccines are free for all, why should pvt hospitals charge for them?”

Is he actually trolling his own party’s government in Punjab? pic.twitter.com/h6A9uaLprs

Out of the 1.14 lakh COVAXIN doses procured at Rs.420 per dose and received on May 27, the Punjab government sold some of the stock to private hospitals at Rs.1060 per dose. While it had acquired these doses for people aged between 18 and 44 having co-morbidities, for construction workers and families of healthcare workers in government vaccination centres, the private hospitals are reportedly administering them to all adults at Rs1,560 each. Speaking to the media on June 3, SAD chief Sukhbir Singh Badal claimed that vaccines were being diverted to private players at hefty margins to create an artificial shortage.

Similarly, Union Minister Prakash Javadekar too lashed out at the Punjab government advised Rahul Gandhi to concentrate on the situation in Punjab rather than giving lectures to others. Highlighting that the Centre has provided nearly 22 crore doses to states free of cost, he reminded that it was state governments that had sought decentralization of vaccine procurement. Taking a swipe at the internal turmoil in the Punjab Congress unit, Javadekar claimed that the state government was failing in vaccine management.

After the backlash, the Punjab government issued a fresh order on June 4 stating, "The order of providing one-time limited vaccine doses to 18-44 years age group population through private hospitals has not been taken in the right spirit and is hereby withdrawn. Further, it has been decided that private hospitals should return forthwith all the vaccine doses available with them. The doses which they have utilised as of date should also be returned back, once they get direct supplies from the manufacturers."