Mocking BJP Andhra Pradesh's cavalier offer of cheap liquor, Andhra minister KT Rama Rao on Thursday, questioned of the offer was a national one or for states 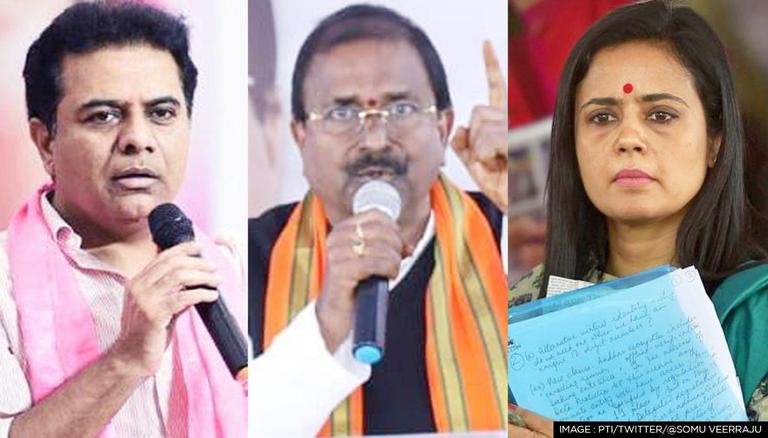 
Mocking BJP Andhra Pradesh's cavalier offer of cheap liquor, Andhra minister KT Rama Rao on Thursday, questioned of the offer was a national one or only in states where the saffron party was 'desperate'. KTR termed it a new low of BJP. Andhra Pradesh BJP chief Somu Veerraju promised to provide liquor at Rs 70 if 1 crore citizens vote for BJP.

Wah…what a scheme! What a shame 😝 AP BJP stoops to a new low

National policy of BJP to supply cheap liquor at ₹50 or is this bumper offer only for states where the desperation is “high”? https://t.co/SOBiRq5gNu

Similarly, TMC MP Mahua Moitra lauded the election strategy tweeting, "What next? Side order of bovine kebabs?". Congress, on the other hand, slammed BJP terming them 'drunk on power' while giving false promises to people. RJD reminded all that BJP is Nitish Kumar's alliance partner in Bihar - which is a dry state.

Brilliant election strategy Messrs Shah & Modi. What next? Side order of bovine kebabs?

The @BJP4Andhra is shamelessly promising cheap liquor if they come to power in Andhra Pradesh. They are drunk on power and believe that the people of the state will fall for their false promises. If only they had an iota of shame! pic.twitter.com/yBuSCglZeT

On Tuesday, Verraju stirred a controversy by offering cheap liquor in exchange for votes in Andhra Pradesh. Addressing a massive 'Praja Agraha Sabha' in Vijayawada, Veerraju added that if the BJP was voted to power, they will try to provide liquor for just Rs 50, if feasible. Ex-Union Minister Prakash Javadekar and BJP MP D Purandareswari were also present at the event.

"Cast one crore votes to Bharatiya Janata Party, we will provide liquor for just Rs 70. If we have more revenue left, then, will provide liquor for just Rs 50", said Verraju. Invoking PM Modi, he urged Andhra citizens to wake up and rise against the corrupt, dynastic, anarchist govt in power. "Get ready to follow in the footsteps of those who are pushing the country towards development with the motto of self-sufficient India and shine a light on us and our future generations," he added.

He lamented, " So far one after the other, power has been tied to those who have only pushed you to darkness. YSRCP and TDP plunge people's lives into darkness, constantly exploiting them, using hooliganism, unnecessary debt, lack of development, anarchy, deceitful speech, demolishing temples, converting churches. Andhra needs double engine govt with BJP in centre and in the state".

His comments even as BJP-JDU ruled Bihar is stubbornly advocating for prohibition. On Monday, Bihar CM Nitish Kumar, called for public shaming of those flouting liquor ban in the state, while hardening his stance against relaxing the stringent prohibition law for those coming to the dry state from elsewhere. Kumar had recently said that he would rethink the prohibition law amid deaths to spurious liquor in the state.