'Two Ends Of A River': NCP Refutes Rumours Of Alliance With BJP After PM-Pawar Meet

Maharashtra Cabinet Minister Nawab Malik on Saturday asserted that BJP and NCP were like "two ends of a river that can never meet". 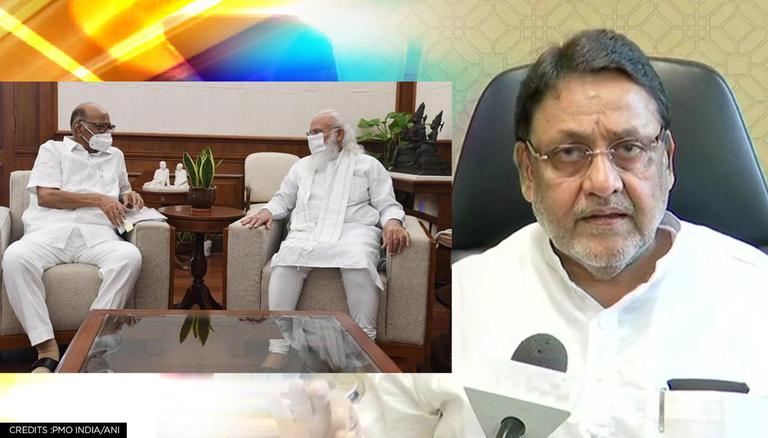 
Putting to end all speculations of the coming together of Nationalist Congress Party (NCP) and the Bharatiya Janata Party (BJP), Maharashtra Cabinet Minister Nawab Malik on Saturday asserted that the two parties were like "two ends of a river that can never meet". Speculations began after NCP supremo Sharad Pawar met Prime Minister Narendra Modi earlier in the day to discuss 'various issues' amid the ongoing war of words between NCP,  Shiv Sena and Congress in Maharashtra.

Speaking about the meeting, Nawab Malik said, "It was to discuss the amendment in Banking Regulatory Act. Elaborating on the same, he added, "Pawar has also handed over a memorandum to the Prime Minister informing how jeopardising these amendments are for the interest of the cooperative bank banking system."

Meeting shouldn't be viewed from a political perspective: Sena

Shiv Sena, a partner of NCP along with Congress in the Maha Vikas Aghadi government, also stated that there were no political links to the meetings. Speaking to the Media, party leader Sanjay Raut said, "If Pawar has met the Prime Minister, then there is no need to be surprised. Pawar sahib and Modi Ji share an old bond and they always consult each other. I saw in the photos that Pawar sahib had taken a file along with him, it might be related to agriculture or co-operation."

The meeting of PM Modi and Sharad Pawar comes a day after Pawar's meeting with Union Defence Minister Rajnath Singh along with ex-Defence Minister AK Antony. The two former defence ministers were briefed by CDS  Gen. Bipin Rawat & Army Chief Gen. Manoj Mukund Naravane on the ongoing conflict over the Sino-Indian border dispute, clarifying the two ministers' doubts. This flurry of meetings comes amid a war of words between NCP,  Shiv Sena and Congress in Maharashtra and the Centre's plan to take up 23 bills in parliament for passage.

Sena has often clashed with its ideological polar opposite Congress since the formation of the Maha Vikas Aghadi alliance over issues like Hindutva, CAA, NRC, Ram Janmabhoomi, Savarkar, COVID-19 etc, with NCP playing the peacemaker. Several ministers from NCP and Congress have accused Uddhav Thackeray of depending more on bureaucrats than his alliance partners, alleging that they were being 'sidelined'. Congress chief Balasaheb Thorat, minister Ashok Chavan has openly stated that the party has had no say in any of the decisions being taken by the Thackeray government. All three allies have maintained that the alliance is safe, but BJP has often asserted that the MVA govt will fall on its own.